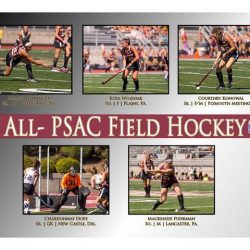 Kyra Wozniak, Mackenzie Fuhrman, Morgan Aldinger and Chardonnay Hope represented KU as the four first-team honorees, the most on the First Team for Kutztown since 1997. Courtney Konowal was also honored with a Third-Team selection, completing her career with four consecutive All-PSAC accolades, the first Golden Bear to do so since the 2013 season.

All five of the Golden Bears’ All-PSAC selections started in all 18 games and were key contributors in the team’s third consecutive season recording double-digit wins. Kutztown finished with an 11-7 overall record and 5-5 mark in the PSAC, recording marquee wins over No. 3 West Chester University and No. 1 Shippensburg University.

As the go-to player on the offensive end for KU, Wozniak started in all 18 games for the Golden Bears in her sophomore campaign, tallying a team-high 13 goals (fourth in PSAC), including five game-winners (second in PSAC), and recording one assist. She ranked first on the Golden Bears with 58 shots and 37 shots-on-goal. In her most impressive performance of the season, Wozniak scored two goals, including the game-winner, in KU’s 3-0 win over No. 1-ranked Shippensburg.

Fuhrman, a sophomore midfielder, was responsible for facilitating the offensive attack this season, recording five goals and a team-high nine assists (third in PSAC). The Lancaster-product’s nine helpers rank in the top-10 all-time at KU for assists in a season. Fuhrman has started all 34 games in her career, racking up 23 points in her two seasons in Maroon and Gold.

A senior defender, Aldinger anchored the backline of the Kutztown defense, which recorded five shutouts on the season. Aldinger, whom also served as the KU corner specialist, posted a team-high six defensive saves, adding three goals and seven assists on the offensive end. The Pennsburg-native appeared in 72 career games, starting 70, with 39 career points.

Hope, the steadying force between the pipes for the Golden Bears, served as KU’s starting goalie in all 18 contests of her senior campaign. In the PSAC, she ranked third in goals-against-average (1.143), save percentage (.811) and saves per game (5.0). Hope posted 11 wins and five shutouts for the Maroon and Gold in 2017, earning PSAC Player of the Week and National Field Hockey Coaches’ Association honors for her performance against No. 1 Shippensburg. Hope’s 1.45 career goals-against-average ranks third all-time at KU and she finishes her career with ten combined shutouts.

As mentioned, Konowal completed the rare career sweep of All-PSAC honors, earning a Second Team selection in 2014 and Third Team selections each of the past three seasons. In her senior campaign, the Plymouth-Whitemarsh prep tallied three goals and three assists playing in both the midfield and forward positions. For her career, Konowal started all 73 games during her time in Maroon and Gold, racking up an even 12 goals and 12 assists.

KU now looks ahead to the 2018 season with optimism, returning first-teamers Wozniak and Aldinger, along with several other underclassmen who made significant contributions in 2017.