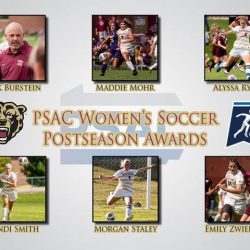 KUTZTOWN, Pa. – The fourth-ranked Kutztown University women’s soccer team has accomplished a lot on the field during the 2017 season, and for its success, five players and head coach Erik Burstein were recognized by the Pennsylvania State Athletic Conference (PSAC) office on November 3.

Sophomore forward Emily Zwiercan was named the PSAC Athlete of the Year, Randi Smith was voted Freshman of the Year, and Burstein is the Coach of the Year.

Along with these three major awards, senior Morgan Staley, sophomore Maddie Mohr and Zwiercan earned First Team All-PSAC honors for the Golden Bears, while junior Alyssa Ryan was voted to the Second Team.

She has started in 19 of the 29 games this season, and earned the PSAC and United Soccer Coaches National Athlete of the Week (9/11) after earning 11 points in one week in wins against Lock Haven and Gannon.

The Reinholds native has notched four game-winning goals, including the lone goal in a 1-0 victory at Millersville (9/13). She also recorded a hat trick against Gannon (9/9).

It is the second postseason honor for Mohr, who was also named to the First Team last year as a freshman. She has a team-high 14 goals (third in PSAC) and 28 points (fifth). The 14 goals is tied for third at KU for goals in a season.

The Elizabethtown native has started 44 of 45 games and is seventh in program history with 25 career goals.

Staley, a two-time captain, is a member of the First Team All-PSAC for the first time in her career. She was named to the NSCAA All-Atlantic Region Third Team in 2015 as a sophomore.

The defender has started 19 of 20 games this season and has played in 67 games in her career. She has been the back bone of a defense that has 11 shutouts on the season and given up just 12 goals in 20 games. She also has tallied two goals and one assist on the year.

Ryan has been recognized for her first postseason honor this season. She is a team-captain and has totaled four goals and four assists this season, and is fourth on the team with 12 points.

The midfielder has started all 20 games and has played in 61 games throughout her career.

Burstein earned his first Coach of the Year award this season. He is in his 11th season at the helm and is the winningest coach in program history with a 137-58-13 (.690) overall record.

The No. 4 Golden Bears will await their next game and destination in the NCAA Atlantic Region tournament, which begins Friday, Nov. 10. The live NCAA Selection Show will be held on Monday, Nov. 6, at 6 p.m. on www.NCAA.com.