The Most Hotly Anticipated Videogame Releases for November 2017 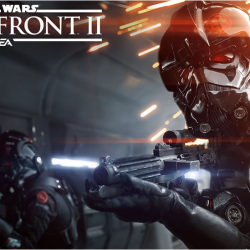 That being said, November 2017 has a couple of hotly anticipated releases. The releases I’m most excited for are Star Wars Battlefront II and Call of Duty WWII.

Star Wars Battlefront II, developed by Electronic Arts (EA) subsidiary DICE, is said to have fixed the problems that plagued its predecessor, Star Wars Battlefront. Content was the single largest grievance gamers had with Star Wars Battlefront. This game lacked a single player story mode, which has been a hallmark for Star Wars games since their inception, it lacked game modes, and it lacked playable maps. To say I ignored these flaws is an understatement! I would consider myself a big Star Wars fan, and on an impulse I almost immediately bought this game. I poured countless hours into this game and personally I agreed with the consensus that this game had an underwhelming amount of content. There just wasn’t enough maps, weapons, and game modes that came standard with the game and I was pretty disappointed at this. What this game did get right, however, was its visual and sound design. The landscapes of famed Star Wars planets like Endor and Hoth look absolutely beautiful and every detail is immaculately rendered. The stomping of AT-ATs in the distance and the whirring of lightsabers fully immerses the player into the fantastical Star Wars universe. The playable heroes in this game, like Darth Vader and Chewbacca, were a blast. The setting of this game is the original trilogy, which in addition to other things, is adapted very well.

Battlefront II changes gears to the prequel Star Wars trilogy, that of droids vs clothes. Battlefront II has a single player campaign this is told from the perspective of an Imperial Stormtrooper after the destruction of the Death Star. Not much is known about the campaign but based on the premise alone it is going to be very interesting. Similar game modes from Battlefront are making their way to Battlefront II with a couple of additions. Free maps are going to be given to players every couple of months and many more heroes, like Darth Maul and Yoda, are going to be playable in this game (EA).

Star Wars Battlefront II is available for purchase on PC, Xbox One, and PS4 on November 17.

I remember fondly in sixth grade when I first played Call of Duty. At the time the most up to date game was Modern Warfare 2 but the one I got my hands on was the previous year’s title, Modern Warfare. Long story short, I played that game so much that my mom took it away from me and didn’t let me play it again. What good times those were! Call of Duty operates on a yearly release schedule and for many years I would buy each new game but eventually I got bored. The gameplay was repetitive, unoriginal, and it didn’t feel nuanced or exciting like it had in the past. For these reasons I stopped buying Call of Duty games a couple of years ago.

But the addition of a Call of Duty game with a WWII setting in a time where many games are going further and further into the future is a welcome change that’s generating a lot of buzz. One of the selling points for this installment is that it is “boots on the ground”. There is nothing in this game that makes the player move incredibly fast or get ridiculous power-ups that make them invincible. The combat has been “stripped down” to what it used to be. Gameplay in Call of Duty: WWII is now back to being skill based, which Call of Duty has not been for a number of years.

Call of Duty: WWII was released for PC, Xbox One, and PS4 on November 3.