Is This Finally the Eagles’ Year? 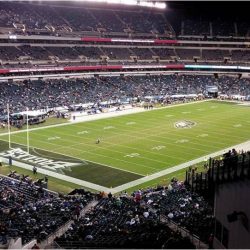 For the first time since 2004, the Philadelphia Eagles can say they are among the elite in the NFL through the first 10 weeks of the season. The Eagles’ franchise coming into the 2017 season was considered by many to be in a “building year,” only expecting an 8-8 record at best. It would be an opportunity for second-year quarterback Carson Wentz to get a full season under his belt and gain more experience, setting the team up to contend in one or two years. That theory was wrong by a mile.

Wentz has been the story of the league through the first 10 weeks. After an up and down rookie season, throwing 16 touchdowns and 14 interceptions, he has shattered those numbers in just over half a season. Through only 9 games, Wentz has 23 touchdown passes and only 5 interceptions to his name. He has become the favorite for winning the MVP this season after being a longshot back in September. The growth of Carson Wentz in 2017 is due to the tremendous detail he puts into his work every day.

“Carson is one of those guys that nothing really surprises you with the way he prepares, the way he conducts himself on a day-to-day basis, interacts with his teammates, works, is detail oriented,” Eagles quarterbacks coach John DeFilippo said in an interview with NBC Sports. “So really, nothing really surprises me with Carson. He’s just that big, athletic guy that makes a lot of plays for us.”

After starting 3-0 in 2016, the Eagles stumbled, finishing 7-9, with a lot of needs to address. General Manager Howie Roseman was a busy man in the offseason, making key acquisitions. He acquired star wide receiver Alshon Jeffery via free agency to give Carson Wentz a go-to receiver. He also signed high character veterans to bring cohesion into the locker room in running back LeGarrette Blount and defensive end Chris Long. Lastly, the addition of defensive tackle Tim Jernigan solidified the defensive line, making them one of the most lethal defensive lines in the NFL.

Roseman’s additions to the team have paid huge dividends 9 games into the season. The Eagles rank among the top in the NFL in numerous categories. They rank 1st in the league in passing touchdowns thanks to the meteoric rise of Carson Wentz. They also dominate the line of scrimmage, ranking 3rd in the league in rushing and 1st in the league on defense against the run. The ability to dominate the line of scrimmage on both sides of the ball has led this team to the position they are in.

Fans have seen this team flourish under the radar early in the season. Now national analysts have taken notice of the sudden and unexpected rise of the Eagles into one of the elites in the league.

Still not convinced buying into this team? Four times in team history before this season the Eagles have started a season 8-1. This trend very much in their favor. In 1949 and 1960, they won the NFL championship, finishing those seasons at 11-1 and 10-2. Fast forward to 1980 the Eagles finished 12-4, advancing all the way to the Super Bowl, ultimately losing the game. Finally, in 2004, they had a tremendous 13-3 record, again making it to the Super Bowl and losing a 24-21 heartbreaking loss to Tom Brady and the New England Patriots. The Eagles are in prime position to make a Super Bowl run again this season. Led by MVP candidate, Carson Wentz and a stout defense, the sky is the limit for this team. The 2017 team has the potential of capturing the first Super Bowl championship in franchise history.