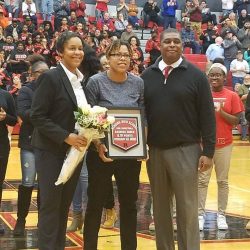 Recognition ceremony was held at the Geigle on Tuesday evening

On Tuesday evening, Reading School District honored Rashida Suber, RHS Class of 2003, for her accomplishments on and off the court.

While at Coppin State University, Rashida earned numerous honors, including MEAC Player of the Year in 2007, Most Outstanding Performer of the MEAC Tournament in 2006 and MEAC All-Rookie pick in 2005. She was a three-time MEAC first-team selection and led the her team to three NCAA Tournament appearances. She is also the all-time leading scorer at Coppin State.

Rashida has now returned to the “R” to coach the JV  Girls’ Basketball Team.