The Sandy Beach Triathlon: One Man’s Will 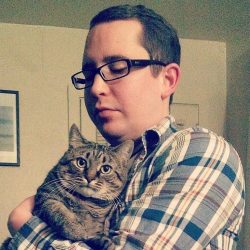 An Ironman Triathlon is not just a test of the human body, but a test of the human mind and soul. It consists of a 2.4 mile swim, a 112 mile bicycle ride, and a 26.2 mile marathon. The entire contest must be completed in this order, in under 17 hours for a person to be considered an Ironman.

How much can a human being endure? The answer to this question is:

This brings us to the tale of Daniel Owens. Mr. Owens is a 38 year-old former Blockbuster Video manager from Turnkey, Pennsylvania. His story is just one of many that exist among all of the Sandy Beach Ironman Triathlon participants; however, Daniel Owens may have the most powerful story of them all.

Owens is now on day 24 of the Sandy Beach Ironman Triathlon which was closed and shut down approximately 23 days ago.

Minutes and hours, so crucial to a triathlon, have become unimportant to Daniel Owens.

“There’s no quit in me!” Owens bellowed sweatily, as he stared directly into the sun. The vultures gathered on a nearby lamp post visibly cringed.

“At this point, we just feel sorry for him,” said Razor Beak Empress of the Vultures. “He’s moving so slowly that we’ve stopped circling him. We just fly a few meters ahead and wait. Usually, a near motionless mammal is just carrion to us, but Daniel is another beast, and one has to admire a man so driven by his own delusions. When we eat his eyeballs, we will be gentle. I will wear a necklace of his toenails to honor him.”

Other potential predators were not so forgiving in their opinions.

“Really, I think he’s just a jerk,” said a great white shark who declined to be named. “When I saw him floating lazily in the ocean, I thought he was a wounded sea lion. Easy pickings, if you know what I mean. Normally, I can sense blood from three miles away, but I had to get in really close for Daniel. His blood is thicker than mooring rope, and quite frankly, he is so out of shape that he has no business being in my sea, or even a bathtub. I did not eat him because he disgusts me, and for context, I recently ate a footlocker full of old boots.”

This last statement seems to be the growing consensus of many in the Sandy Beach community.

“This is foolishness!” shouted longtime Sandy Beach resident Herbert Hander. “I’m born here, raised here, and have lived for these ninety years on Sandy Beach. But, there’s just no reason for this man’s earnestness. I once beat a swordfish to death with my bare hands, but at least I had a reason for doing it! Do you want to see my scars? See my sea scars!”

This reporter declined to see Mr. Hander’s sea scars, but was shown anyway. They were, in fact, horrific sea scars.

Officials from The World Triathlon Corporation, the overseers of Ironman Triathlon competitions, refused official comment on Daniel’s participation. However, an anonymous source within the organization stated, “We are fully aware of Mr. Owens participation. We have been monitoring his near abject lack of progress. At this point, the competition has been officially closed and we assume no liability. If Mr. Owens wishes to carry on, he does so at his own discretion. Godspeed, Mr. Owens.”

During the bicycle part of the competition, Owens was spotted riding a chrome 1987 GT Pro Freestyle Tour in vague figure eight patterns, and not making much progress. The marathon portion, has been an even larger challenge for Owens, as he has been wearing canvas Keds, sans socks.

“These old Kedders don’t offer much ankle support,” chortled Owens. “But they are breathable shoes, and they allow the blood from my heels to seep out.”

“Just this morning, I looked out of my kitchen window to see Daniel dragging himself along the street with his own tongue,” said Jennifer Johnson, a local beautician. “He appeared to be pulling himself in the way a snail moves, you know, with that weird creepy foot thing that isn’t really a foot, just a gross gelatinous extension of their body. I wish Mr. Owens had an outer shell, so he could cover himself from the sun. It is warm today, and he hasn’t been treated kindly.”

“These damn kids,” lamented Sheriff Giles. “On one hand, it’s pretty funny, but on the other hand, I have to do my job and uphold the law. And there’s probably a law against throwing salt on a man like he’s a glistening Auntie Anne’s pretzel.”

“Sometimes, when The Sun goes away, it’s just me and The Moon out here,” said Owens, completely undaunted by the loss of an entire fortnight of his life. “I just want to cross the finish line, and I can do that if The Moon believes in me.

When asked for comment, The Moon politely declined, then circled back sheepishly to give an answer. “Look, I know Daniel is going through some rough times. I feel for him, I really do,” said The Moon. “Humans and wolves have prayed to me throughout all of time. For many “moons” I guess you could say,” said The Moon, laughing heartily at its own terrible joke. “But all kidding aside, I just control wolves and the tides of the ocean. Daniel is on his own.”

At Daniel’s current pace, sports scientists and Las Vegas odds makers have theorized that he may make the finish line by the end of the Thanksgiving Day weekend. Unfortunately, the finish line has since become a paved over parking lot for a newly constructed McDonald’s.

When told of this new development, Owens was cheerful, and stated he could really use an Egg McMuffin. “Gotta get my protein, you know.”

Upon hearing this, Dr. Gell visibly shivered and said that while Daniel’s journey has led her to contemplate retiring from medicine, she will carry on in order to study Daniel’s heart.

For no one has a larger heart than Mr. Daniel Owens.