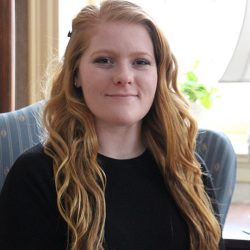 Ricki Kay Deeter enrolled in the Business degree at Penn State Berks because she wanted to help establish and grow her family’s farm in Pine Grove, PA. Her studies have paid off by enhancing her agricultural skills. As a result, she was recently honored with the National FFA (Future Farmers of America) American Degree.

Each year, less than 1% of FFA members receive the American Degree, making it one of the organization’s highest honors. Deeter received the award in October 2017 at the the 90th annual National FFA Convention & Expo in Indianapolis. In addition to the degree, each recipient receives a gold American FFA Degree key.

The American is presented to members who have demonstrated the highest level of commitment and made significant accomplishments in their supervised agricultural experiences.

Deeter said she was recognized in part for the record keeping that she did during her internship at Fox & Wolfe, an organic produce farm, also located in Pine Grove. She was able to apply the skills that she learned in the Penn State Berks Business program to her internship and also to her family’s farm, where they grow crops and raise livestock such as horses and chickens.

She explained that she chose the Individualized Option within the Business degree program, allowing her to tailor her degree to her own unique needs. She plans to graduate in May 2018.

In addition to working on two farms and completing her degree, Deeter also teaches Sunday school at St. John’s Lutheran Church in Tremont.