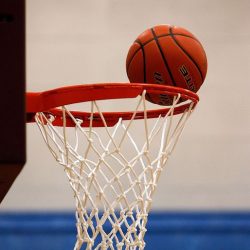 The Albright Lions women’s basketball team was able to grind out their 11th straight win as they defeated crosstown rival Alvernia 69-56 at the Bollman Center on Thursday night in MAC Commonwealth play.

With the win, the Lions improve 18-5 overall and 13-1 in MAC Commonwealth play. Meanwhile, the Golden Wolves drop to 4-18 overall with a 0-13 record in conference play. Albright has 12 straight wins now in their series with Alvernia and maintains first place in the conference with two games left in the regular season.

Albright quickly raced out to a 6-2 lead before back-to-back three-pointers from the Golden Wolves gave them an 8-6 lead at the 6:26-mark. The Golden Wolves continued to surprise the Lions early by controlling play which helped them grab a 16-12 lead with 44 seconds left in the quarter following their third three-pointer of the first. Alvernia held a 17-15 lead after one quarter which was a complete change in the first meeting as the Lions held a 22-4 lead after one at Alvernia. The Lions again started on a 6-2 advantage to start the beginning of a quarter to take a 21-19 lead with 7:39 left in the first half. Albright built its largest lead of the half at 29-24 before the Golden Wolves stormed back with eight unanswered points behind a pair of three-pointers to take a 32-29 lead with 1:06 left in the first half. Horka would then help the Lions take a 34-32 lead into halftime with four points in the final minute.

Both teams struggled to get going in the second half as the Lions were able to work their way out to a 40-35 lead at the 5:07-mark of the third quarter. Alvernia ran off five straight points to tie the game at 40, but that was as close as they would get to the lead the rest of the way. The Lions were able to turn the tide of the game with seven unanswered points to close out the third quarter, and forced five turnovers during that span to take a 47-40 lead. Albright then used a 10-3 run to start the fourth quarter to take a 57-43 lead to ultimately put the game away. The Lions forced four turnovers on four straight Golden Wolves possessions during that span. Albright eventually worked its way out to a 17-point lead at 64-47 before holding on to the 69-56 win.

The Lions will return to action on Saturday, February 10th when they will travel to face #16/#19 Messiah in a battle for sole possession of first place in the MAC Commonwealth at 2 p.m.