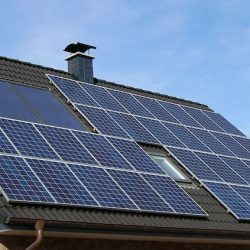 PITTSBURGH – A sizable majority of Pennsylvanians support moving the state to 100 percent renewable energy by 2030, according to a new survey. The poll, conducted by Greenberg Quinlan Rosner Research, showed that more than 7-out-of-10 voters in the state would support a switch to clean, renewable sources of power such as wind and solar. According to Eva Resnick-Day, community organizer with the Sierra Club, that includes more than half of the state’s Republicans.”Across different political parties, across sectors, there’s overwhelming support to move towards a resilient and clean energy future,” Resnick-Day said.Three Pennsylvania municipalities already have committed to making the move to 100 percent renewable energy, and more are in the process of adopting that goal.Support for a switch to renewable is gaining momentum. Resnick-Day said that’s because the growth of solar panel installations, wind farms and energy-efficiency programs has already produced results.”As communities see these changes occur, they realize it’s not only a really amazing vision of 100 percent clean energy, but that it’s possible,” she said. “And they’re seeing the benefits of that on an economic level.”In Allegheny County, 86 percent of voters polled want to reach 100 percent renewable energy – an 11 percent increase since just last summer.Resnick-Day added that as the cost of renewable energy falls and a growing number of clean energy projects come on line, achieving the 2030 goal is possible. But to make it happen, they’ll need support from state lawmakers.”The people of Pennsylvania want to see 100 percent clean energy,” Resnick-Day said. “They want good paying, safe jobs for our communities. But we need our state and our politicians to be behind us to help accelerate that change.”Almost two-thirds of survey respondents said they would have a more favorable impression of an elected official who supports 100 percent renewable energy.