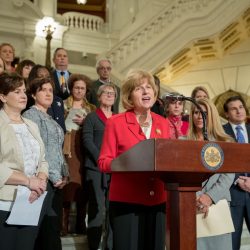 Harrisburg, PA – Sponsored by Senator Judith L. Schwank (D-Berks County), the Executive Women’s Council of Pittsburgh (EWC) has been instrumental in bringing Senate Resolution 255 to the forefront. The Resolution, titled “Encouraging equitable and diverse gender representation on the boards and in senior management of companies in Pennsylvania,” currently stands in the Senate Rules and Executive Nominations Committee.

A Press Conference encouraging this milestone for women in the Commonwealth occurred Tuesday in the State Capitol Rotunda.

“We’re here to discuss something I feel is really obvious, the fact that women are different than men and women bring a unique perspective to anything that they are engaged in, and those perspectives demand consideration in every aspect of society,” Schwank said. “We have a unique voice that can bring about necessary changes.”

The Resolution urges privately held and publicly traded businesses and nonprofits doing business in the Commonwealth to have a minimum of 30 percent women directors by December 31, 2020 progressing toward equal representation of men and women on an annual basis with measurable results. Further, that gender diversity will be good for business in Pennsylvania.

Andrea Funk, the former CEO of Cambridge-Lee Industries, said despite being the top female executive in two organizations she was frequently excluded from executive meetings and presentations.

“In fact, I was most commonly the note-taker, or secretary, in many of these meetings in which the work was done and recommendations were formulated, and then excluded from the concluding meeting, in which my recommendations were presented and  the ultimate decision was decided,” Funk said.  “I don’t believe I was intentionally excluded but I was not intentionally included. I needed resilience and perseverance to achieve the role of CEO. It is harder to be heard without support and a seat at the table.”

Christine Koebley, President of EWC, said the group’s mission is to provide leadership and facilitate opportunities to increase political and economic power of women.

“Our online Women on Boards Database features the credentials of qualified women available for corporate and public board appointments,” she said. “We have been and continue to be contacted by organizations to provide candidates for board opportunities and have successfully placed a number of women on government boards. So, we’re hoping that once this is passed we can use that database to help facilitate finding women qualified for these roles.”

Heather Arnet, CEO at Women and Girls Foundation of Southwest PA, said SR 255 is more than a “feel-good” or “diversity” resolution.

“This is a resolution which will improve the corporate performance of companies based in Pennsylvania and that’s something all Pennsylvanians should want,” Arnet said.

In addition to EWC, members of the American Association of University Women, PowerLink, the Forum of Executive Women and the Pennsylvania Federation of Democratic Women attended the press conference to support SR 255.