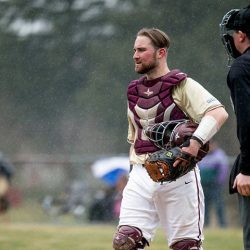 During the spring semester, Kutztown University will feature a variety of student-athletes in order to get an inside look on their everyday lives. Articles will not only focus on their athletic performance, but what they do outside of competition. This week’s feature is junior Nick Lafferty from the baseball team.

Nick finished last season third in hits with 37 and 43 total bases. This season, he has a career-high of five RBIs in KU’s victory over Barton, is batting a career-high .408, and is second on the team with 15 hits and 20 RBI. In addition, Nick enjoys helping people both on and off the baseball field. He has met his best friends through baseball and plays the game for his teammates.

What is your major and what made you decide on it? What do you see yourself doing after you graduate?

“I have a dual major in finance. It’s financial planning and general track finance; I also have minors in both communication studies and business. I decided on this because I really like helping people, I figured finance would be a good thing to go into. I would like to start a non-profit organization that has to do with financial planning to help poverty; explaining to people about the stock market and helping them understand the process of it.”

What goals does the team have for this season?

“Definitely playoffs, that’s the biggest prize for everyone. Hopefully after that, we will pull through and become PSAC champs, then extend it to regionals and hopefully the World Series.”

How did your team do during spring break? How are these trips important to starting off the season?

“It went well, we beat the No. 4 team in the nation. A lot of guys stepped up big time and we couldn’t have asked for better play. Coach said that was the best we have done in about 12 years down south and we played the best competition we’ve ever played. It was important to starting off the season because it got us out on the field and playing. Every inning is a team building inning; when we’re able to get out there and play together we become closer as a family.”

What would you say your biggest strength and weakness is as a team?

“Our biggest strength is team chemistry. All of us get along, there isn’t a person on the team that I wouldn’t want to go out to eat with or hang out with off the field. I like everyone on the team and I believe everyone would speak for that too. For a weakness, we become lackadaisical at times and tend to sit back when we’re in the lead. We need to learn that when we have the advantage, we can continue to put up runs.”

How do you feel you’ve become an asset to the team?

“I just try to be the best role model that I can. I play a position where everyone has to look at me on the field and I try to keep an upbeat personality at all times to make sure everyone around me has that energy and wants the same thing as me.”

What is your favorite part about being an athlete?

“All the guys on the team and the coaches. If it wasn’t for them, I don’t think I’d be playing the game of baseball; I love playing it for my team. That’s the main reason why I’m there, I’ve got a bunch of brothers. I met my best friends through baseball.”

How do you prepare in the offseason?

“A lot of working out and hitting. I work out in an academy in Philly, where I am able to hit and workout whenever, so that helps me out a lot.”

Who is your biggest inspiration?

“I would have to go with my dad. My dad works night shift and is the hardest worker I know. When I was a kid, the first thing I picked up was a whiffle ball and a bat. My dad never played baseball in his days, but he sat down and studied the game of baseball and has taught me ever since I was a kid. He coached me from the time I played T-ball when I was 5, until I was 15. He finally took a break when I got to high school.”

What is the best piece of advice your coach has given you? How did it impact you?

“There’s too many, but definitely when I was a freshman. When I came here, there was a very good catcher in front of me. I knew there was a way I could help the team in some other way, so I talked to my coach. When you’re a freshman, you’re more nervous to talk to your coach, but I knew I had to approach him because I love the game of baseball and I wanted to find a way to help our team any way I could. When I sat down and talked to him, he basically told me that he respected what I said. Honestly, getting that respect from coach, made me feel even more at home. Hearing that your coach respects you is really awesome.”

Outside of baseball, what do you like to do in your free time?

“I like to go hunting and fishing. I’m also in a club called best buddies. It helps kids with needs and I have my buddy, his name is Chris. We hit baseballs, just hang out, or go out to eat sometimes. I try my best to hang out with him at least twice a week, now that I’m in season. I just like making a difference in someone’s life.”