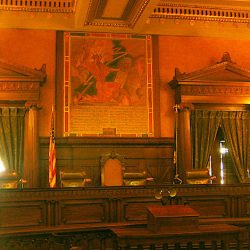 HARRISBURG, Pa. – By a wide margin, Pennsylvanians say they want their congressional district maps drawn by an independent commission rather than state legislators. A recent poll found that 68 percent of voters in the Keystone State favor a nonpartisan process to draw fair maps that will end political gerrymandering in the state. More than half strongly favor using a commission rather than leaving it up to the state Legislature. According to Micah Sims, executive director of Common Cause PA, the results were consistent across the state.”Gerrymandering has had such a negative impact on our Commonwealth that overwhelmingly people believe that it’s time to take it out of the hands of politicians and really put it in the hands of everyday citizens,” he says. The Pennsylvania Supreme Court redrew maps when the Legislature failed to create one that didn’t favor a single party. In response, some Republican legislators threatened to remove justices, claiming the court overstepped its authority.But Sims notes that the citizens of the state disagree with those lawmakers.”We saw overwhelmingly that the majority of people in Pennsylvania believe that to actually have legislators who want to impeach justices just because of a decision that they did not like is ludicrous,” he adds. Fifty-three percent of those polled sided with the court while only 24 percent agreed with the legislators.With Pennsylvania’s primary elections coming up on May 15, Sims says the board of elections has done an outstanding job updating voting information about the new districts, but the new maps alone will not fix the problem.”The cure to ending the disease known as gerrymandering is actually taking the power out of the hands of the politicians, of the elected officials, and putting it into everyday citizens,” explains Sims. The poll showed only 22 percent of respondents favor allowing state legislators to draw district lines.