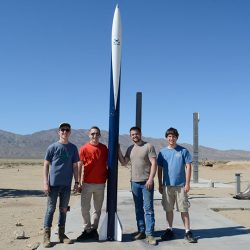 For Kale Odhner and his fellow Penn State Berks students, the idea to build a sugar-fueled rocket began as a senior capstone project. The initiative launched them from Odhner’s Berks County barn, where they manufactured the fuel and the motor, all the way to the Sugar Shot to Space in California’s Mojave Desert in hopes of breaking a world record for altitude with a sugar-fueled rocket.

After a year of hard work and a week of driving from Pennsylvania to California, the team saw their masterpiece go up in smoke on April 21. The rocket exploded shortly after it was launched, reaching an altitude of about ten feet. Even though they did not break any records that day, the project provided invaluable real-world experience that the team members will be able to put to use in their future endeavors.

The team was composed of Rob Gaydos, Thomas Jones, Kyle Nye, and Odhner – all seniors majoring in Mechanical Engineering at Penn State Berks. They were joined by Clint Shirk, an Aerospace Engineering major from Penn State University Park campus who worked with the team on the early development of the rocket and setting up the initial pressure sensors and the tests. Asher Odhner assisted as well, a Mechanical Engineering major at University Park and Kale’s brother.

“This project was an incredible opportunity to try new ideas and work with a team of very devoted people,” commented Shirk. “We had many challenges along the way which we had to overcome, but overall these challenges led us to have a greater understanding of all the different components involved in building a rocket. The experiences gained while working on this project will leave a lasting impact on all of us.”

Jones added, “If you have the right people working on something they are all passionate about, great things can happen.”

The goal was to reach an altitude of 45,000 feet. In order to achieve this objective, the team built a powerful motor. In fact, their motor was so powerful that it would not meet the regulations for local launch clearances, so they decided to travel to the Mojave Desert, home to the Sugar Shot to Space–a competition “to launch a rocket powered by sugar propellant into space 100 km above the earth’s surface.”

Odhner began working on the rocket project in the summer of 2017, when he was awarded a prestigious Erickson Discovery Grant from Penn State for his project titled, “Research and Design of Class 3 Rocket.” That summer, he conducted research in the technologies and processes to produce an efficient rocket engine using sugar as the fuel source.

When asked why the team used sugar, Odhner explained that it is a cheap fuel–costing only about one-dollar-per-pound compared to 20- or 30-dollars-per-pound for other fuels–making it a good choice for learning about rocket dynamics.

The 12-foot rocket held six feet of fuel, weighted 155 pounds, and boasted 2,000 psi chamber pressures. The team painted the rocket Penn State blue and white, then Odhner and Gaydos drove it and the fuel manufacturing system to California for the launch.

This was not Odhner’s first or second attempt at building and launching a sugar-fueled rocket. For this project, the team constructed a new motor and developed a new method for manufacturing fuel in Odhner’s Kempton barn using sucrose, or table sugar, as the base.

Although disappointed, he comments that he was not surprised that the rocket did not reach its goal. He goes on to say that when the team was developing the motor, they experienced approximately 30 failures. During one of the test launches, the force of the static testing actually blew a hole through two walls of Odhner’s family barn, which he rebuilt before letting his parents, who now live in Pittsburgh, know.

“The mental strife is very hard,” Odhner states about the failed launch. “It’s a lot of work, then it suddenly disappears. Building rockets is one of the most challenging jobs in engineering. Working with rocket motors is unlike anything that most people ever experience. You are dealing with so much energy in a short period of time, that when something goes wrong, it goes very wrong. It’s very stressful and you have to take a lot of safety precautions.” He adds that he has had a perfect safety record with no injuries to any of the team members.

“I think the biggest takeaway from the project was staying focused and never giving up, no matter how formidable the project seemed,” commented Nye. “Over the course of the project, nothing came easy. Things constantly broke and complications never stopped, but we were able to find solutions through ingenuity and innovation.”

Odhner went on to explain why he founded and served as president of the college’s ASME chapter. “I wanted to create a movement on campus to change how students approach engineering. The ASME club gives students a way to get funding to develop and construct hand-on projects, build their resumes, get internships and eventually jobs. Hands-on experience creates legitimate engineers, and legitimacy is defined by your ability to produce results.”

“More importantly, I wanted to motivate students … to let them know that if they put their minds to it, they can create incredible projects that will give them leverage to reach something that they couldn’t reach before.”

Odhner came to Penn State Berks with real-world experience, having worked as a mechanical contractor and owner of a car dealership. When asked why he chose to major in Mechanical Engineering, he stated that he wanted to master the logical side of the brain, adding that the understanding he gained in the degree program prepared him to build rockets.

What does the future hold for this Odhner? He graduated from Penn State Berks on May 5, and plans to move to Mojave Desert area where he will continue his passion–building and launching rockets. He also hopes to begin a career working with rocket motors.