Community Foundation awards $50,000 to bring the arts to downtown Reading 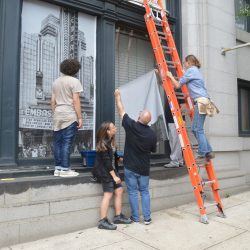 READING, PA  – As part of a larger effort to build on the increasing momentum to revitalize downtown Reading, Berks County Community Foundation has awarded seven grants totaling $50,000 to bring arts programs to the Penn Street area.

The Penn Street Arts Grant Program brings residents of the city and the region to Penn Street to support downtown businesses and encourage the development of vacant properties by creative entrepreneurs. The program began in 2015 and continues annually through at least 2019.

“The more positive activity there is downtown, the more likely it is that businesses will want to invest in the area,” said Heidi Williamson, Community Foundation vice president of programs and initiatives.

The Penn Street Arts program complements other initiatives of the Community Foundation, such as the Downtown Alive free outdoor concert series and the Reading Fire + Ice Fest, both of which are held in the 500 block of Penn Street.

$9,950 to Genesius Theatre to stage a full-scale musical, complete with orchestra, in the courtyard in the middle of the 600 blocks of Penn and Court streets. This is the fourth year in a row for such a performance, which will likely take place in mid-September.$9,415 to Barrio Alegria for “El Circo del Barrio: A Two-Day Interactive Experience,” which will address themes of love, loss, adventure, and immigration through choreographed theater, dance, and culinary experiences as audience members meander from Second Street to Sixth Street along Penn Street in the late summer or fall.$7,250 to the Ringgold Band for its performances at the Reading Downtown Improvement District’s World War II Midday Café that took place on June 1 and at the upcoming holiday tree-lighting ceremony and during the Reading Holiday Parade.$6,985 to Reading Choral Society to support Berks Choir Games activities at locations throughout downtown. This will be the fifth year for this event, which features small performances in restaurants and larger events at venues such as the Lincoln Tower Apartments (formerly the Abraham Lincoln Hotel) or the WCR Center for the Arts, 140 North Fifth Street.$6,000 to Reading Theater Project for an original musical called Piper’s Pitch to be staged at the WCR Center for the Arts for six performances this fall and a teaser performance during the Penn Street Market, which takes place at Fifth and Penn streets on Thursdays from 10 a.m. to 2 p.m.$5,500 to Berks History Center for “Berks History on Penn Street,” which turns the unoccupied storefront of the Callowhill Building, 443 Penn Street, into an art exhibition using images from Berks History Center collections. The exhibit is being installed this week.$4,900 to ReadingFilmFEST for its FiveMinuteFEST High School Competition at the WCR Center for the Arts. FiveMinuteFEST is designed to encourage and celebrate local student filmmakers, connect them to the ReadingFilmFEST, and provide them with opportunities to meet professional filmmakers and learn more about this art form.