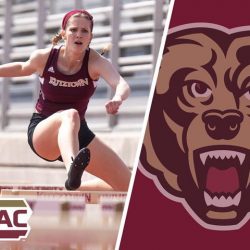 KUTZTOWN, Pa. – Fresh off her Academic All-America award, Kutztown University’s McKenzie Fagan earned another prestigious honor on Tuesday. Fagan was 1-of-10 student-athletes across the entire Pennsylvania State Athletic Conference (PSAC), five females, to be named to the 2018 PSAC Spring Top 10.

The PSAC Top 10 Awards, chosen and voted on by the league’s sports information directors, are designed to recognize student-athletes who excel in both the classroom and in athletic competition. Initiated in 1997, the Top 10 is given to five males and five females in each athletic season; fall, winter and spring.

Fagan is an Academic All-American and a PSAC Champion for the women’s track & field program. A 2018 KU graduate, Fagan is an eight-time Dean’s List honoree and graduated with a 3.96 GPA. She has been a three-time PSAC Scholar-Athlete, a two-time D2ADA Academic Achievement Award winner, and was named to the All-Academic Team by the coaches’ association last year.

In track & field, Fagan closed her career as a two-time PSAC Champion in the high jump. She won the 2017 indoor title, went on to qualify for indoor nationals in 2017 as a junior, and capped her career with the 2018 PSAC outdoor title. She is a four-time All-Region high jumper, two-time All-PSAC selection, and was the 2018 KU Coaches Award winner this past April.

Fagan’s best marks in the high were 5-7.25 indoors for second in school history, and 5-5.25 outdoors for fourth in school history. In multi events, she ranks third in the indoor pentathlon at 3,193 and 10th in the heptathlon outdoors at 4,006.

Fagan marks the first PSAC Top 10 award winner for Kutztown since track & field’s Emma Sullivan in the winter of 2016.