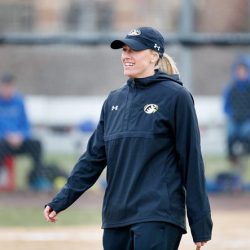 OLD WESTBURY, N.Y. – Katie Lynch Apostolopoulos left such a mark during her four-year playing career at Kutztown University, head coach Judy Lawes asked her to remain with the program as an assistant coach after graduation.

Now, after additional stops as an assistant coach at Iona as well as the leading role at Cedar Crest College, Lynch is poised to join NYIT Athletics as head softball coach.

“It’s an honor,” Apostolopoulos said. “I’m excited about the success the program has had in the past and where we can take it to.”

“Katie brings a championship pedigree to our softball program,” Vélez said. “A true student of the game, she will be able to positively impact our program and student-athletes. Katie’s high level of professionalism and work ethic will allow her to make a smooth transition to our department. I have no doubt the student-athletes will respond well and we will build a softball powerhouse at NYIT.

“She brings a great skill set to not only the softball side of the equation, but also in dealing with any situation that may arise. Her experiences as a player and high maturity level will allow her to command the respect of the student-athletes and serve as a role model.”

A testament to the reputation she built at Kutztown, Lawes – the program’s decorated longtime coach – hired Apostolopoulos after graduation to prepare catchers and pitchers for games. Apostolopoulos remained at her alma mater for one season as an assistant coach before moving on to Division I Iona.

Apostolopoulos spent two seasons as an assistant coach with the Gaels, where her responsibilities included working with hitters and fielders, including the catchers. She then landed the head coaching role at Cedar Crest, producing a 42-32 record in two seasons.

“I think the relationships I developed at Kutztown prepared me for my opportunities in coaching – and, definitely, playing in a national championship game and reaching two World Series laid the groundwork for my coaching career,” Apostolopoulos said.

Apostolopoulos also has served since 2013 as the lead softball instructor for Long Island Thunder Training in Floral Park and has taught at several other camps, from Long Island, to Pennsylvania, to Las Vegas.

She was born on Long Island, but moved with her family from Floral Park to Lancaster, Pa., at age 2.

Her sister Tracey recently completed her third season as an assistant coach at UNC Greensboro, and also has coached at Stony Brook, LIU Post and the College of Charleston.

NYIT softball reached the NCAA Tournament as recently as 2017, but the Bears’ record dipped to 10-26 this past spring, including 8-16 in the East Coast Conference. NYIT, which had the highest ERA in the ECC last season at 5.86, is bringing in some highly regarded arms, including All-Long Island first-team selections Jessica Budrewicz from MacArthur High School and Emily Koerick from Longwood High School. On the position-player side, the returnees include second-team All-ECC selections Brooke Scherer and Lizul Portugal.

Apostolopoulos indicated that “building a good team culture” is among the early priorities.

“And to be a competitor in the conference is what I expect,” she added. “And to build each day.”

Said Velez: “Her impact will also be felt off the field. She was four-year member of the Kutztown University dean’s list and was named an All-American and Pennsylvania State Athletic Conference scholar-athlete. During her time as the head coach at Cedar Crest College, 36 of her athletes were recognized as Colonial States Athletic Conference All-Academic Team performers. She understands the impact of high academics.”