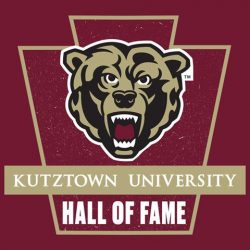 The class will be recognized at the induction ceremony on Saturday, Oct. 27, prior to KU’s home football game vs. West Chester, at the Georgian Room of Old Main beginning at 9 a.m.

Note: Coach Wesner will also be recognized on campus a week prior at KU’s 50 Seasons of Field Hockey celebration on Saturday, Oct. 20. Details can be found by clicking here.

The seven new inductees increase the membership to 213 since the Hall of Fame was formed in 1977.

Registration details will be made public when available.

Arbogast is the most decorated pitcher in the history of the Kutztown softball program. She was a two-time PSAC East Pitcher of the Year, and was named an all-region and All-PSAC East First Team pitcher in each of her four years at KU.

She graduated with 14 school records spanning across seven different season and career pitching categories. Among her KU records, she also ranks in the top-10 for multiple PSAC career records. She ranks third in PSAC history with 1,026 career strikeouts, 922 innings pitched, 166 appearances and eight saves, fourth with 99 wins and 100 complete games and 10th with 30 career shutouts.

Arbogast was part of the second-winningest senior class in KU softball history. She led KU to 180 wins over four years and a .743 winning percentage. KU won the PSAC East and qualified for the NCAA Tournament in each of her four years. In her senior season (2010), when KU needed two wins to stay alive in the NCAA Tournament, Arbogast pitched consecutive shutouts against Fairmont State and Shepherd. She was named the 2007 KU Female Rookie of the Year.

Collins was a four-time All-America performer in the long jump, the second-most All-America honors for a Golden Bear in program history. He was a six-time PSAC Champion, including four in 2004 with titles in the triple and long jump. He also won an ECAC Championship.

During the indoor season, Collins was a two-time All-America long jumper, placing fifth at the 2004 NCAA Division II Indoor Championships. His indoor-best performance of 24-7.75 set a school record, which he still holds today.  Earlier in the 2004 indoor season, Collins was named PSAC Athlete of the Year and Most Outstanding Field Athlete at the PSAC Indoor Championships after winning the long jump and triple jump.

During the outdoor season, Collins earned All-America honors with a third-place finish in the long jump at the NCAA Division II Outdoor Championships. His PSAC Championship long jump of 25-0.75 set a school- and meet-record, both of which still stand today. He was also the PSAC champion in the triple jump.

A team captain and MVP as a senior in 2004, Collins was voted the KU Male Athlete of the Year as a senior. He was a four-year member of the KU Presidential Ambassadors, serving as the Vice Chairman in 2003. Collins is currently a business education teacher at Western Wayne High School.

Collins, a native of Lake Ariel, Pa., is a high school business teacher in the Western Wayne School District. He and his wife, Trina, are expecting their first child in October.

Fitzgerald, the 2008 PSAC East and Daktronics Atlantic Region Player of the Year, graduated as KU softball’s career record-holder for hits, doubles and games played, while ranking second to teammate and KU Hall of Famer Steph Denlinger in four others.

Fitzgerald was a three-time All-PSAC East First Team selection as a utility player for the KU softball team. She earned all-region honors all four years, including First Team recognition her final three seasons.

Her four-year senior class of Krista Cameron, Steph Denlinger and Kim Morrison graduated as the winningest senior class in program history with 169 wins and a .727 winning percentage. KU qualified for the NCAA Tournament all four years and won three PSAC East titles.

Fitzgerald, a native of Kitchener, Ontario, is a corporate underwriting analyst for Economical Insurance.

Loper was a four-time All-PSAC honoree and two-time All-Region selection for the KU baseball team. He was the 2006 PSAC Athlete of the Year, and in his senior year in 2007, he earned his third-straight All-PSAC East First Team selection as an outfielder and an additional All-PSAC honor as a pitcher.

Loper was a career .350 hitter and is the PSAC-record-holder with 226 career games played. He ranks third all-time in program history with 228 career hits and 156 career RBI. He also ranks fourth with 651 at-bats and fifth with 141 runs scored.

Stretching out hits for extra bases, Loper’s nine career triples rank second in school history and his 25 homers are third-most.

Loper is a police officer for East Pennsboro Township. He and his wife, Kahla, have one daughter.

Morton is one of the greatest and most decorated quarterbacks in school history. He was voted to KU’s All-Time Football Team in 2015 and helped lead KU to its first PSAC Championship in program history in 2011.

A three-time regional finalist for the Harlon Hill Award and a two-time PSAC East Offensive Player of the Year, Morton graduated with 15 school records – 14 of which still stand today. He was a three-time All-PSAC and two-time All-Region quarterback, and earned All-America Honorable Mention accolades in his junior year of 2011.

Morton led the Golden Bears to three-straight winning seasons to end his career that included a school-record 10 wins in 2010, a broken record of 11 wins in 2011 in KU’s PSAC Championship season, and back-to-back NCAA Tournament appearances for the first time in school history.

A native of Abington, Morton is a physical education teacher in the Muhlenberg School District.

Stocky was an All-America goalkeeper for the KU field hockey team. She is the school-record-holder with 797 career saves – a record that has stood for more than 20 years. She also holds the single-season save record (255) and ranks in the top-three in school history in career shutouts (17.5) and goals-against-average (1.47).

She earned First Team All-America honors in 1995, was a two-time All-PSAC selection and was named the LVAIAW Player of the Year as a senior.

Stocky is currently a Regulatory Manager at Lonza Inc. She is the Lafayette PTO Treasurer, the Race Director for Lafayette’s Tiger Chase 5K, 10K and Kids Fun Run, has run multiple marathons, is an Ironman finisher and was a USA Triathlon national qualifier.

She and her husband, Brian, reside in Lafayette, N.J. with their two children – Dylan (9) and Hailey (7).

Wesner, one of the winningest field hockey coaches in NCAA Division II history, coached at KU for 33 years upon her retirement in 2012 – becoming the longest tenured head coach in Kutztown athletics history.

She first arrived at KU in 1980 and compiled a career record of 344-257-15 (.571), ranking her fifth all-time in Division II in victories and seventh in winning percentage. She was inducted into the Berks County Chapter of the Pennsylvania Sports Hall of Fame in 2014.

Her 1988 squad recorded a school-record 18 wins and finished fifth in the national tournament. She captured three PAIAW conference crowns while coaching one National Player of the Year in KU Hall of Famer Jennifer Wolfgang Rush, 46 All-Americans, two PSAC Athletes of the Year, 19 PAIAW All-Stars and 79 All-PSAC honorees.

Wesner donned 22 winning seasons in her career and in 2007, guided her team to become the first KU woman’s program to receive a No. 1 NCAA ranking during the regular season. She was named the NFHCA South Region Coach of the Year in 2007.

Wesner won her 300th career game at KU with a 3-2 overtime win at Mercyhurst on September 20th, 2008. During the 1999 season, Wesner recorded her 200th career victory, also an overtime win over Mercyhurst with the winning goal scored by her daughter, Sarah Greer (Wesner).

Her team earned the NFHCA Team Academic Award in each of her final nine seasons, finishing in the top five in Division II in team GPA in five of them.

Wesner served as head women’s lacrosse coach at KU from 1984-90. She was the director of equal opportunity in sports from 1985-87 and served as the department’s compliance officer for 15 years. Prior to KU, Wesner taught health and physical education and coached field hockey in the Twin Valley School District. Her 1975 squad won the Berks County title.

Wesner has served on several field hockey committees, including that of the PSAC, NFHCA and the NCAA national selection committee. She has served as the president of the Lehigh Valley Association of Intercollegiate Athletics for Women.

Wesner received a bachelor’s degree in health and physical education from West Chester in 1971. She is a graduate of Emmaus High School and resides in Exeter Township. She has four grandchildren.