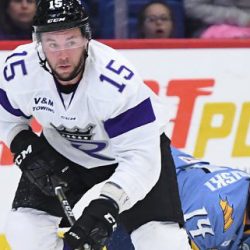 The Reading Royals, ECHL affiliate of the Philadelphia Flyers and Lehigh Valley Phantoms, have announced that forward Tyler Brown has signed an ECHL contract with Reading for the 2018-19 season and has been named a player-assistant coach. The 6-foot-2, 203-lb. native of Wasage Beach, ON joins the Royals coaching staff with Head Coach Kirk MacDonald and assistant coach Mike Marcou.

Brown scored five goals and 14 points with the Royals as alternate captain last campaign and was honored as the Royals’ 2017-18 Unsung Hero at the team’s Awards Banquet. He has played seven professional seasons.

Tyler Brown: “Royals fans, I’m excited to be back in Reading for another season. I have a lot of good memories of last year but we have some unfinished business to take care of this season. With the group we have back, I’m confident we will be back making a run for the Kelly Cup again. I’ll be behind the bench sometimes this year taking on a coaching role and I’m honored to have the trust in the coaching staff to allow me to do so. I’m looking forward to seeing everyone again.”

Kirk MacDonald: “We are thrilled to have Tyler take on an additional leadership role as player-assistant coach with the Royals this season. He will help better our players on and off the ice. Plus, he has a good shot and is an important special teams player for us.”

Brown, 28, has played 415 professional games and is the second veteran contract (at least 260 professional hockey games, excluding goaltenders) the Royals have signed this offseason. Per ECHL rules, teams may carry four veterans on the active roster and reserve list during the regular season and Kelly Cup Playoffs.

Before joining the Royals in summer 2017, Brown skated for the New York Rangers organization from 2014-17. He scored four goals and 21 points with Greenville in 2016-17 (48 GP) before moving to central Pennsylvania. Brown has made the playoffs three times in the last four seasons, including a run to the 2015 Calder Cup Playoffs’ Eastern Conference Finals with the Hartford Wolf Pack. The first five seasons of his professional career, Brown played in the AHL. He spent his opening three seasons with Adirondack, then the Flyers’ AHL affiliate.