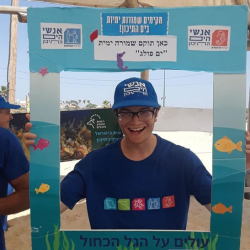 Reading, PA — Evan Cardinal ’21 has been preparing to visit Israel ever since earning a Jewish education scholarship in his junior year of high school. This summer, as a college sophomore studying political science and international relations at Albright, he’s finally in Tel Aviv, working to preserve the Mediterranean Sea.

Cardinal is interning with ANU, a non-governmental organization whose name literally means “we” in Hebrew, and is the result of three major social change organizations merging. The name is meant to be a call for the organization’s more than 100,000 members to work together with civil society towards social justice. ANU is known for grassroots campaigns aimed at strengthening Israel’s democracy, advancing socio-economic issues, and diversifying public discourse through media and digital activism.

The hours for Cardinal’s nine-week summer internship are a bit different abroad. “ANU requires its interns to work five days a week, Sunday through Thursday, between five to seven hours a day,” he says. “Friday and Saturday are the weekend due to Jewish Sabbath.”

Still, during off hours, Cardinal has plenty of time to explore the city and culture. “Natives of Israel and foreigners rave about the night life of Tel Aviv, which is indeed fantastic,” he relates. “Yet I enjoy public parks, markets and small shops during the daytime.”

Cardinal says that the entire experience is giving him a better perspective of life — something he hopes to carry into a career rooted in community service after graduating from Albright College.

“Going into this internship, I hoped to see and understand the inner-workings of grassroots campaigning,” he reflects. “Fortunately, I have experienced first-hand and learned that unyielding passion and determination can both attract supporters for a project and inspire substantial policy change.”