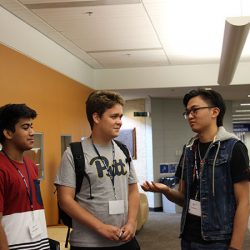 This fall, Penn State Berks welcomed 104 international students to the campus community. Of that number, 40 are new students. To help these students succeed, the college has implemented a variety of programs and events.

According to Sharon Pitterson-Ogaldez, coordinator of diversity and international programs, the largest area represented by our international students is Asia, including the countries of China, South Korea, and India. This year, Penn State Berks also has international students from Egypt, England, Federated States of Micronesia, Germany, Hong Kong, Mongolia, Nigeria, Russia, Taiwan, and Vietnam.

Kaiyuan “Kevin” Xu is originally from Shanghai, China. He came to the U.S. five years ago as a high school student and he lived with a host family in California. Both of his guardians were high school teachers specializing in English and math. After graduation, Xu decided to follow in his father’s footsteps and pursue a degree in civil engineering at San Jose State University, part of the California State University system. After the first year, he realized that his interests were geared more toward mechanical engineering.

“Penn State has a great reputation for engineering,” explained Xu on why he chose to move across the country. “I already love it here. Berks has a friendly environment; it’s a great place to begin my studies.” He went on to say that he wanted to study in the U.S. because he wanted to develop skills and to get a “more thoughtful education.”

It was a love of Marvel Studios that brought Zirui “Rinna” Wang to the U.S. from the City of Wuhan in southeastern China. She explained that her dream job is to work in Marvel Studios’ marketing department. She came to the U.S. a year ago as an exchange student and lived in Atlanta. While she enjoyed the area, she was attracted to Pennsylvania, citing her love of football. Her ultimate goal is to graduate from Penn State, get some experience in marketing, and then return to China to work for Marvel Studios.

Ilya Ignatenko, a first-year student planning to major in electro-mechanical engineering technology, is originally from the City of Ufa, which is located 1,000 miles east of Moscow. Two years ago he moved to the U.S. to live with his mother who moved here 10 years ago when she remarried. At that time, Ignatenko chose to remain with his father in Russia to play ice hockey.

He began his studies at Reading Area Community College and when he visited Penn State Berks in the spring, he was impressed by the Gaige Technology and Business Innovation Building, where he will be working in the engineering labs taking classes in the major. “Penn State Berks is in a nice location. The campus is not too big and not too small.”

Jheng “Jacky” Yan Lin arrived in the U.S. only three days before International Student Orientation from his native Taiwan. He plans to begin his studies at Berks, and complete his major in Finance at University Park.

“The Penn State Smeal College of Business school is really good,” he stated. “Berks is a great place to start. The people are really nice.”

Yan Lin goes on to explain that he wanted to leave his comfort zone and learn about a different culture. His parents were hesitant at first but they were proud that he wanted to challenge himself. He also feels a responsibility to educate his fellow students about the Taiwanese culture.

Upcoming events include a Welcome Barbeque that will bring together international and domestic students on August 31; an exploration of Pennsylvania Dutch Culture on September 7; a Unity Day celebration where the entire campus community celebrates diversity on Sept. 19; and a trip Philadelphia with international students from regional Penn State campus on September 22.In addition, Penn State Berks has several clubs that celebrate cultural diversity including the Black Student Union; Chinese Culture Club; INK (International Klub); Latino Unity Club; Muslim Students’ Association, and the Punjabi Culture Club.