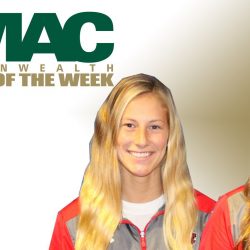 Haley scored her team-leading 11th goal of the season in the 64th minute of a 1-0 victory at Lebanon Valley on Saturday. The Boyertown, Pa., native ranks second in the MAC in goals (11) and tied for second in game-winning goals (4). Haley also added an assist in a 2-1 win vs. Stevenson on Tuesday.

Tunney recorded eight saves on 17 shots faced over two games for Albright last week. The senior goalie recorded three saves in Tuesday’s 2-1 win over Stevenson and notched her fourth shutout of the season with five saves in the 1-0 victory at Lebanon Valley.

Senior defender Erica Bross and junior midfielder Jillian Lapidus had previously swept the MAC weekly awards for Albright for the week of Sept. 24-30.

This marks the fourth time this season that Haley has captured Offensive Player of the Week honors and she is the first player in program history to accomplish the feat four times in one season.

Albright is back in action on Wednesday, Oct. 24. when they head to Widener for a key MAC Commonwealth tilt at 5:30 p.m.