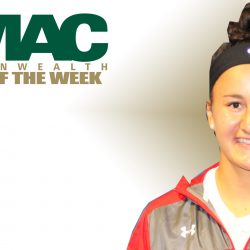 ANNVILLE, Pa. – Albright Freshman midfielder Autumn Bieber was named the MAC Commonwealth Offensive Player of the Week as announced by the league office on Monday morning.

Bieber helped Albright wrap up the No. 3 seed in the MAC Commonwealth tournament as she scored the Lions’ lone goal in a 1-1 draw at Widener on Wednesday and recorded a goal to go along with two assists in a 5-2 win vs. Alvernia on Saturday.

The Mertztown, Pa., native leads the team with nine assists on the season, a total that ranks second in the MAC Commonwealth. Bieber has scored four goals to go along with two assists over her last four games.

The Lions are back in action on Wed, Oct. 31. when they travel to battle No. 2 seed Arcadia in the MAC Commonwealth semifinals at 7 p.m. This marks the first time since 2011 that Albright has advanced to the semifinal round.