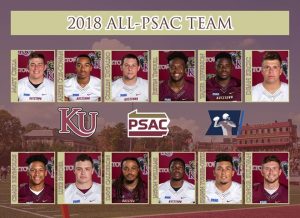 KUTZTOWN, Pa. – Heading into its biggest game in nearly a decade, 12 members of the 20th-ranked Kutztown University football team have been honored by the Pennsylvania State Athletic Conference (PSAC) as All-Conference selections, announced on Nov. 14. KU’s 12 honorees, six on offense, five on defense and one on special teams, are tied for the most in program history.

The breakdown of the 12 players, of which seven are multiple-time All-PSAC award winners, and their selections are as follows:

Craig Reynolds (Willow Grove, Pa./Abington)
The do-it-all tailback was voted to the First Team for the third consecutive year. Reynolds has had a historic final campaign in a Maroon and Gold uniform. He became the program’s all-time leader in rushing touchdowns (34) in the victory at Edinboro last weekend. A two-year team captain, Reynolds has rushed for 764 yards this season and 14 TDs. He has also caught three TDs and tallied 397 receiving yards. The 17 total TDs ranks third in the PSAC.

Justin Tindull (Seven Valleys, Pa./Dallastown Area)
At left tackle, Tindull has started in all 10 games this season and racked up 30 starts in his three seasons in Maroon and Gold. The Dallastown Area-prep’s 21 consecutive starts rank third-most among active players. This is the first All-PSAC selection for Tindull, joining Williams and Cella as KU’s trio of First Team All-PSAC offensive lineman.

Jayson Williams (Pomona, N.J./Cedar Creek)
Williams, Kutztown’s right guard, has started all 10 games in 2018 and has a total of 21 starts in his two seasons in a KU uniform. The Cedar Creek-prep has now started in 12 consecutive games with the NCAA Playoffs and his senior season still to come. This is the first All-PSAC selection for Williams, joining Tindull and Cella as KU’s trio of First Team All-PSAC offensive lineman.

Matt Cella (Secane, Pa./Springfield)
Cella, a junior center, has made 30 career starts, anchoring the middle of the offensive line for now his third consecutive season. The Springfield-prep has started all 10 games this season and has made 21 consecutive starts, tied with Williams for third among active players. This is the second All-PSAC selection for Cella and his first First Team honor after being picked to the Second Team in 2017.

Tajier Jefferson (East Orange, N.J./Queen of Peace)
KU’s ‘man in the middle’, Jefferson has produced an outstanding resume as a Golden Bear, playing in 41 games over his four-year career.  Jefferson ranks 10th in school history with 284 career tackles and held a 35-game start streak, missing only two games throughout his time in Maroon and Gold. The Queen of Peace-prep completes the career sweep of All-PSAC awards with this selection, earning his third First Team selection and fourth overall All-PSAC nod.

Ahkee Cox-Cowan (Harrisburg, Pa./Harrisburg)
Cox-Cowan, a junior, followed up his breakout sophomore season with more of the same effective play at the corner position in 2018. His 15 pass breakups (PBUs) rank fifth in the PSAC and he has added three interceptions in 2018, matching his totals from 2016 and 2017. The Harrisburg-native continues to climb the career charts, after setting school records for passes defended and PBUs last season, as he has totaled 45 career PBUs, second all-time. This is the second straight First Team selection for Cox-Cowan, whom also earned All-Region Second Team Honors in 2017.

Shawn Turber-Ortiz (Northumberland, Pa./Shikellamy)
Turber-Ortiz, a redshirt-sophomore, burst onto the scene in 2018, racking up 97 total tackles, five passes defended and 2.5 tackles-for-loss thus far. The Shikellamy-prep’s 9.7 tackles per game ranked second among all PSAC players with his 6.0 solo stops per game ranking first. The Northumberland-native has started all 10 games this season, earning his first All-PSAC selection.

Dean Krcic (Saylorsburg, Pa./Pleasant Valley)
Krcic, Kutztown’s starting punter, continues to prove himself as one of the best ‘legs’ in school history, earning his second straight All-PSAC selection. Krcic’s 42.7 yards per punt is tops in the conference and his 10 punts of 50-plus yards ranks second. The Saylorsburg-native has started all 21 games since arriving on campus, earning First Team honors after his Second Team selection in 2017.

Conor Sullivan (Whitehall, Pa./Whitehall)
Sullivan, a senior wideout, has shown continuous improvement throughout his career, earning his first-ever All-PSAC selection as a fitting cap to his time in Maroon and Gold. Sullivan recently eclipsed 1,000 career yards and has a career-high 536 yards in 2018, which is also the most among KU pass-catchers. The Whitehall-prep has amassed 1,114 career yards and 12 touchdowns as a Golden Bear, appearing in 31 games.

Dave Calderon (Willingboro, N.J./Neptune (New Haven))
Calderon, a newcomer to the Kutztown program for his senior season, has made an immediate impact on the defensive line at his rush-end position. The Willingboro, N.J.-native has totaled five sacks and 9.5 tackles-for-loss this season, racking up three sacks against Millersville on Nov. 3. A New Haven-transfer who took a two-year hiatus from football before coming to KU, this is the first career All-PSAC honor for Calderon.

Luke Snyder (Levittown, Pa./Pennsbury)
Snyder, a linebacker, has earned his second-straight All-PSAC nod, making the Second Team Defense as he did in 2017. The Pennsbury-prep has appeared in nine of KU’s 10 games this season, making 53 total tackles and forcing a team-high two fumbles. Snyder now has 111 career tackles in his three seasons in Maroon and Gold, adding 11.5 tackles-for-loss.

Kutztown’s 12 all-conference honorees, along with the collection of the Golden Bear football team, continues its preparation for its First Round NCAA Playoff Game at home on Nov. 17, welcoming Hillsdale (OH) College to University Field for a 12:05 p.m. kick-off.