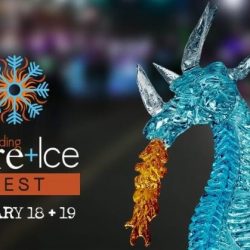 Reading Pa. – In honor of his unwavering dedication to the city of Reading, this year’s Reading Fire + Ice Fest is being held in honor of Reading City Council Vice President John Slifko, who died unexpectedly earlier this month.

“Given all that John did for the city both as a City Council member and as a private citizen, we thought it was appropriate to honor his legacy by dedicating 2019 Reading Fire + Ice Fest to him,” said Daniel B. Laws Jr., Chairman of the Reading Downtown Improvement District, which stages the festival.

He added that in further remembrance, a special ice sculpture is being created to recognize the councilman. The sculpture will be unveiled during the festival’s opening ceremonies Friday night at 5:30 in the 500 block of Penn Street.

Charles R. Broad, Executive Director of the Improvement District, noted that Slifko was a staunch supporter of the District and its ongoing efforts to maintain a clean, green, and safe downtown environment.
“John served as a liaison between City Council and the Improvement District’s board of directors, and we valued the input and insights he brought to the table,” Broad said. “He also was actively involved with the city’s former Main Street Program, which was managed by the District. We were very fortunate to have John’s steadfast guidance over the years.”

Reading Fire + Ice Fest will be held Friday night between 5:30 and 10 p.m. and Saturday from noon to 10 p.m. Only severe weather conditions will prevent the festival from being held.
Fireworks originally scheduled for the New Year’s Eve celebration at the Pagoda will be part of the festival. The annual aerial display was canceled because of inclement weather, but is now scheduled to go off Friday at 9 p.m., weather permitting.

In addition to the fireworks, another new twist to this year’s fest is the debut of a new brew called McKinley’s Prosperity Stout, which will be served up by Saucony Creek Brewing Company, one of the festival vendors. Sales of the brew will help raise funds for the restoration of the William McKinley monument in City Park.
Reading Fire + Ice Fest will once again feature a variety of both indoor and outdoor activities, including a Snowfall Ball, professional ice-carving competitions, fire performances, a chili cook-off, a large food and beverage tent, live music, and food trucks. All outdoor activities will be free, and the chili cook-off and Snowfall Ball will have nominal entry fees.

Scheduled to perform at the Snowfall Ball on Saturday, January 19 is The Uptown Band, one of the country’s most versatile acts that feature an exciting and eclectic mix of music. The “casual dress” ball will be held at the DoubleTree by Hilton Reading hotel ballroom. Doors will open at 6 p.m.

Sculpted Ice Works, located near Scranton, Pa., will rejoin Reading Fire + Ice Fest with spectacular ice sculpture displays and carving competitions. Established in 1999, Sculpted Ice Works is a full-service ice event company with several members of the National Ice Carving Association, and is owned by Mark Crouthamel, a carver with more than 20 years of experience under his belt.

Returning again to thrill audiences with their heart-stopping fire performances will be Madeleine Belle from Philadelphia and Flame Nouveau from Allentown.

Reading Fire + Ice Fest is organized and presented by the Reading Downtown Improvement District and supported in large part by a generous grant from the Hawley and Myrtle Quier Fund of Berks County Community Foundation.