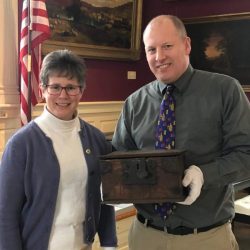 The Berks History Center (BHC) is pleased to announce the transfer of a rare artifact, a wooden strongbox or chest, to the care of the Chester County Historical Society on Wednesday, January 30, 2019.

The artifact, which was designed to hold and protect important papers, is particularly unique due to its age and well documented history. While BHC staff members knew of the chest’s existence and were aware of a 1684 date carved on its face, it was only during the BHC’s 2016-2017 collections management initiative that its full history and significance came to light.

The collections management initiative was an undertaking designed to improve artifact related record-keeping through a process of inventory and historical research. PA Museums, Pennsylvania’s state-wide Museum Association, awarded the BHC with a 2018 Institutional Achievement Award in recognition of the initiative’s success.

The chest belonged to Benjamin Mendenhall of Concord, a township of Chester County until the formation of Delaware County in 1789. The earliest known historical text that discusses Benjamin Mendenhall is the 1862 publication History of Delaware County, by George Smith. Smith indicates that Mendenhall was a wheelwright who emigrated from the English town of Mildenhall in 1686 (contemporary research shows that Mendenhall attended a Philadelphia wedding on November 15, 1684, so he clearly arrived in Pennsylvania sometime prior to that date). Numerous sources indicate that he served one term in the Pennsylvania General Assembly and was an active member of the Chichester/Concord Monthly Meeting of the Society of Friends. Benjamin Mendenhall was married in 1698 to Ann Pennel and they had a large family; one of their daughters married the famed botanist, John Bartram on October 11, 1729. The Mendenhalls are also the sixth-great grandparents of U.S. President, Richard Nixon.

The Mendenhall chest remained with family members living in Chester or Delaware County until 1872, when the donor-to-be, Stephen Merideth, moved from Pughtown, Chester County to Reading, Pennsylvania. According to the BHC’s accession records, Meredith donated the small chest to the Historical Society of Berks County on September 13, 1921.

While the reasons for Merideth’s donation to the BHC are unknown, the artifact holds significant historical value to Chester County, not only in the unique age and quality of the box, but also in its well documented provenance as a cherished family heirloom.

In 1897, teenager Earl Merideth, son of the chest’s eventual donor, wrote: “I am a profound admirer of ancestral relics, of which I have a great one, namely the money box, about 10″ x 8″ x 6″ of Benjamin Mendenhall. On it are carvings by his own hand, artistic in nature, together with ‘B. 1684 M.’ on the front of box. The old lock though broken still clings to it. It is a wonderful old box, and I may safely say that it bids fair to outlive twice or thrice as many generations as it has in the past. I would not part with it for a great deal. It is made of hickory wood and firmly put together.”

Although the chest has been in BHC collection for nearly 100 years, the artifact has little connection to Berks County beyond the fact that its last private owner lived in close proximity to the museum’s headquarters. After careful research and consideration by the BHC Curator and Museum Committee, the BHC decided to deaccession the artifact from its collection. The BHC offered the chest in recognition of the fact that the vast majority of its history is connected with communities and families of Chester County.

As explained by BHC Executive Director, Sime Bertolet, “after careful deliberation, we concluded that the chest belongs in Chester County, the ancestral home of the Mendenhall family, and we are delighted that the Historical Society of Chester County agreed with this assessment.”