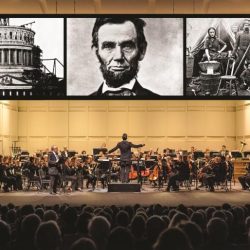 The program also includes Vaughan Williams’ hymn-woven Symphony No. 5 in D Major, together with Interludes by Philip Glass, and George Butterworth’s The Banks of Green Willow.

“Abraham Lincoln was known as a gifted storyteller and talented orator. Now it’s our turn to tell the story of this man who faced such incredible opposition, yet still united a country,” said Constantine.

Concertgoers will experience the Civil War era from the points of view of America’s 16th president and others through music, pictures, and Abraham Lincoln quotes. During the concert, hundreds of Civil War-era images will be projected across a 440-square-foot screen above the performers.

GEORGE BUTTERWORTH – The Banks of Green Willow (1913)
An expression of rustic serenity that leads into mournful tones, this piece written during the build-up to World War I captures the feeling of normal life slipping into wartime.

COPLAND – Lincoln Portrait (1942)
A classical piece that matches quotes from Lincoln’s greatest speeches and letters with music, Lincoln Portrait is the centerpiece of the evening, showing the strength of resilience during trying times.

VAUGHAN WILLIAMS – Symphony No. 5 in D Major (1943)
This reflective, tranquil piece written during a time of bloody conflict brings back a pastoral feeling with themes from an unfinished opera the composer worked on for 30 years.

Tickets for Lincoln Portrait: Images of Freedom can be purchased at Ticketmaster, 610-373-7557 or [email protected].

The concert is sponsored by M&T Bank. The Gertrude Sternbergh Fund of RMF is sponsoring the guest artist.

Additional performances in the 2018-19 season include the magic of cirque with aerial flyers, acrobats, contortionists, jugglers, dancers, and more, in Cirque De La Symphonie on April 13; Puccini’s Tosca in collaboration with Berks Opera Company, the Reading Choral Society, and Berks Youth Chorus on May 4; and Raiders of the Lost Ark in Concert, a special movie event featuring Spielberg’s classic adventure film with RSO performing the acclaimed soundtrack live.