Bobbleheads, Autographs, and Photo Sessions will be Available Free to Fans 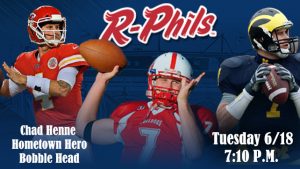 The first 1,500 adults in attendance will receive a Chad Henne Hometown Hero Bobblehead, presented by Pepsi. The figurine will feature Henne in his Wilson Bulldogs uniform.

Henne will be on hand and fans will have the opportunity to attend a free autograph and photo session. The night will also highlight Henne’s charitable endeavors through the Gilmore/Henne Community Fund. The Gilmore/Henne Community Fund improves the community and the lives of children through the revitalization of parks and recreational facilities.

Known locally for starring as a quarterback at Wilson High School in West Lawn, PA, Henne graduated from Wilson in 2004.

He went on to become a four-year starter at Michigan University, and was drafted in the second round of the 2008 NFL Draft by the Miami Dolphins. Henne has put together an 11-year career in the NFL.

June 18th will also feature Happy Hour, with $1 off beer and a pregame concert, thanks to Rusty Rail Brewing Company. Seniors, military members, and veterans also receive $3 off box seats, thanks to White Star Tours and Travel Center.

Group and season tickets are available now at fightins.com. Individual game tickets will go on sale at 9 a.m. on Saturday, February 23rd at the Weidenhammer Ticket Office at FirstEnergy Stadium, online at fightins.com, and over the phone by calling or texting 610-370-BALL.