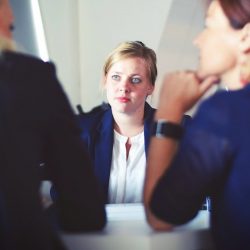 HARRISBURG, Pa. – March is National Professional Social Work Month, when social workers around the country raise awareness of the important roles they fill.

With masters’ degrees and thousands of hours of supervised training, licensed clinical social workers are the number-one providers of mental health services in Pennsylvania. Nationally, there’s a shortage of social workers. And according to Dr. Angelo McClain, CEO of the National Association of Social Workers, their average salaries are much lower than similarly licensed professions.

“Social-work salaries lag behind professions like nursing and teaching,” McClain said. “Social workers have the same obligations in terms of student loans, needs to take care of their family, so salaries should really reflect the value that social workers bring.”

Nationally, social workers are paid an average of $10,000-$15,000 a year less than nurses and teachers. McClain said part of the problem is the fee structure built into Medicare.

“Currently, social workers are reimbursed at 75 percent of the physician fee schedule,” he said. “Social work is the only profession that’s reimbursed at a rate lower than 85 percent.”

The Improving Access to Mental Health Act, to be introduced in Congress this year, would raise social worker compensation to 85 percent.

McClain noted that the opioid epidemic plaguing Pennsylvania and other states makes retaining social workers and ensuring they are adequately compensated more important than ever.

“Social workers are providing the mental health and substance abuse services, and child protective services for those families as well,” he said. “This one social problem has a ripple effect, and social workers are front and center on helping address those issues.”

The NASW is encouraging Congress and the Department of Health and Human Services to offer scholarships and training grants to encourage more people to become social workers.

More information is available at Socialworkers.org.