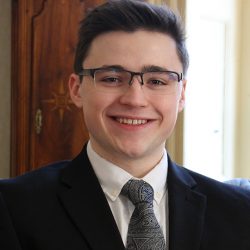 Ethan Adams, a junior with a double major in Information Sciences and Technology and Security and Risk Analysis, is the first recipient of the Simplr Artificial Intelligence Technology Scholarship. He received a $5,000 scholarship, which he plans to use for his tuition and research, as well as in preparation for graduate school.

Adams was encouraged to apply for the scholarship by his program coordinator, Tricia Clark. He also credits his honors adviser Sandy Feinstein with helping him to refine his winning essay describing how certain elements of artificial intelligence will play an important role in the future.

The Simplr Artificial Intelligence Technology Scholarship website states, “Ethan’s application, vision and demonstrated aptitude for AI and related technologies made him the clear favorite out of a strong field of competitors.”

A Penn State Schreyer Honors Scholar and vice president of the Penn State Berks Technology Club, Adams is very engaged on campus. As part of his role in the Technology Club, he was instrumental in bringing Benyah Shaparenko, Product Manager for Speech at Google, to campus to give a presentation. He also works as an intern for a Penn State Berks student startup company called Traduki, which provides virtual real-time translation services.

Adams stated that his ultimate goal would be to attend graduate school to broaden his education in machine learning and then work for DeepMind for Google in research and development.

When asked how his time at the college his prepared him for the future, Adams stated that learning to communicate was the most valuable skill he has acquired. “Since I came to Penn State Berks, I’ve learned how to write and communicate effectively. Communication applies to everything that you do. When you can communicate well, it opens many doors for you.”

He also stated that he would encourage other students to apply for these types of scholarships.

Simplr provides e-commerce companies with top-notch, U.S.-based customer service that’s scalable and affordable. Simplr was incubated and funded by Asurion, a global leader in customer service with over 300 million customers and shares Asurion’s legacy of excellence in customer experiences.