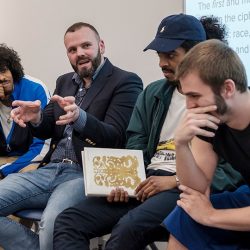 Course goes beyond rap to explore politics, history and culture

If you walk by Professor Justin De Senso’s office, there’s a good chance that you will hear him and one of his students, James Watts, freestyle rapping in between classes. For them, hip hop is a form of therapy–they explore their issues through the poetry and music, delving deeper into challenges and feelings–sometimes finding solutions, other times taking comfort in just being heard.

De Senso, whose wife recently gave birth to the couple’s first child, explores what fatherhood means to him, while Watts opens up about how difficult his engineering courses are and how he thought about leaving the program and the college.

Watts was a student in De Senso’s first-semester writing course when one day before class, De Senso played the song The World Is a Ghetto by WAR. This prompted Watts to strike up a conversation with him about the song, and they discovered that they shared a love of the same kind of music. Soon they were freestyle rapping together in De Senso’s office four to five times a week.

Then the duo grew to a group of about 10 students who would meet regularly to rap, along with De Senso, who would even cook for them on occasion. In fact, there was such a high level of student interest that De Senso and Watts founded a new club on campus, the Hip Hop Collective, open to all students on campus.

A Lecturer in English and African American Studies at Penn State Berks, De Senso has loved hip hop for as long as he can remember. Growing up as a self-described pale-skinned Italian American in a racially and culturally diverse neighborhood on Long Island, he was a ‘hip hopper and amateur freestyle MC.’

“I was, to some degree, trying to reconcile my skin color with my freestyle talents. A lot of my friends were into break dancing but I had weak wrists,” jokes De Senso, who adds that he also had a gift for language.

When asked how he was perceived growing up as a white ‘hip hopper,’ De Senso admits, “There’s always this battle for authenticity within hip hop. You have to demonstrate that you have hip hop’s best interests at heart and that you know what you’re talking about.”

“I’m interested in issues of race, issues of inequality, urban history, the Civil Rights Movement, and the arts; it’s like a big messy Venn diagram of the things I’m interested in and hip hop is at the center,” explains De Senso. “Hip hop allows us to examine all these issues in critical ways.”

As a graduate student at New Mexico State University, De Senso designed and taught a course titled ‘Hip Hop and American Society’ in 2010. He also taught a similar course as a graduate student at the University of Buffalo, where he had the opportunity to work with the ‘father of hip hop ethnography,’ the late Professor Greg Dimitriadis. In fact, Dimitriadis and De Senso co-authored a book chapter on the rapper Ice T in the book Rapper, Writer, Pop-Cultural Player: Ice-T and the Politics of Black Cultural Production (Routledge, 2016).

At the same time De Senso and students at the college were rapping and their hip hop community was expanding, Penn State University was in the process of changing its general education curriculum. Faculty members were invited to apply for seed grants to develop integrative studies general education courses, so De Senso applied for and received a grant to design and teach a course in hip hop.

Now, seventeen years after taking the Penn State course on African American oral traditions that sparked his desire to learn more about the culture and history of hip hop, De Senso has designed and is teaching the first upper-level face-to-face hip hop course offered within Penn State University. ‘Critical Approaches to Hip Hop’ meets at Penn State Berks on Wednesday evenings from 6–8:40 p.m.

“I never thought I’d be able to teach a hip hop course at Penn State,” states De Senso, adding that he teaches an online 100-level hip hop course over the summer for the college.

‘Critical Approaches to Hip Hop’ examines what hip hop is as a social movement and as a political movement. De Senso explains that it is rooted in Afro-diasporic traditions. It was founded by Clive Campbell–a.k.a. DJ Kool Herc–whose family emigrated from Kingston, Jamaica to the United States. Campbell grew up in the South Bronx where his father was a DJ. As a teenager, he tinkered with the technology and started throwing parties. As a result, hip hop was officially born in 1973.

In class, De Senso takes that pivotal year and reads it backwards and forwards in terms of what was going on in New York City and the world at that time. He wants his students to understand the rich and complicated historical context and grasp who these young people were–not just as artists but as young people trying to survive–as part of a longer historical sweep.

He goes on to explain that hip hop is more than rap music. “We don’t talk about rap until a month in to the class. We don’t get into the analysis of the music until we understand what hip hop is as a social movement and what ideas it’s indebted to and the politics, who hip hop’s founding children were and why they were in New York City at that time.”

Once the course was approved, it seemed only natural that Watts, an Electro-Mechanical Engineering Technology major, would enroll and become a de facto teaching assistant. Originally from Pittsburgh, Watts is a long way from home at the college and with his quiet nature, he didn’t know many of his fellow students before he met De Senso. He credits their freestyle rapping sessions with giving him a sense of community.

“It’s good to have people like Professor De Senso around to help me grow,” comments Watts. “I was shy; the course helped me to break out of my comfort zone and learn more about myself. It gave me confidence. I realized that I have a voice on campus and now I look at situations where I can influence other students to take leadership roles.”

“James is one of the brightest students I know,” comments De Senso. “We have kind of a symbiotic relationship. He has been a lighthouse for students here at the campus.”

The enthusiasm for the course has been contagious. The Thun Library created an exhibition of books and media on hip hop, from its Afro-diasporic roots to a biography of Tupac, as well as thought-provoking question prompts such as ‘Where did hip hop come from?’

As part of the course, students were asked to form a cypher, a communal space–usually a circle–used by hip hop artists for expression. Then they were asked to freestyle rap about topics such as race, social anxiety, assumptions, fears, and ways of thinking that create distance or pave the way to healing or connection. To some, this was a challenge; for others it came easy.

For G. Mike Shott Jr., an amateur hip hop artist from Reading, freestyle rapping in the cypher was second nature. He could rap about any topic that was thrown at him.

Shott commented that the course has made a profound impact on him. “This is one of the most valuable courses in the curriculum; it addresses a topic that is not well respected in academia,” explains Shott. “Hip hop provides a bridge between art and activism. It’s multinational. Hip hop translates political strife into a language that people can easily understand.”

De Senso is inclined to agree: “Hip hop reads back to us the ugliness and the beauty of who we are. When we look at it and take it seriously, we can also search for paths forward.”