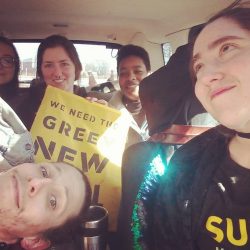 You May Also Like
Facebook Twitter Pinterest Email
Share
​Picture it. A mid-spring Friday evening in the auditorium of a local college in the heart of Reading. The lights dim, and a video plays depicting scores of impassioned young people lining the halls of Congress in protest, holding signs and wearing black t-shirts with slogans like “12 years” or “good jobs and a livable future”. The lights come up and a young woman named Rianna welcomes the crowd. She starts by reminding the audience “we’re organizing on stolen Lenape land. Our indigenous communities were the original stewards of this land and any kind of work is going to require their help to fill the gaps in on our knowledge.” (Lenni Lenape were the original inhabitants of Reading and surrounding areas.)Scenes like this are playing out across the country with stories like Rianna’s tailored to the locale. Stories like this: “My name is Genai, I’m 23 years old and I’m a Sunrise hub coordinator for Tallahassee, FL.  My hometown, Carrabelle, FL, is a small fishing village on the coast of the panhandle. Over the course of my life, I’ve seen the fisheries and local economy of my community collapse because of polluted waters and rising sea temperatures. When I was 14, the BP Oil Spill guaranteed that my generation would never again have the security of seafood work that has sustained my community for generations. Hurricane Michael, the strongest storm to ever hit the panhandle, displaced thousands, killed 72 people, and has left families still living in tents 6 months later.  I’m here fighting for my friends, classmates, and community that struggle every day and feel forgotten.”

[In April], Sunrise Movement Berks hosted one of these town halls on the Green New Deal at Albright College. “This event was part of a wave of 700 Green New Deal town halls across the country coordinated by Sunrise Movement. Sunrise Movement is building an army of young people to stop the climate crisis and create millions of good jobs in the process.”
​
The Green New Deal is a congressional resolution introduced jointly by NY Rep. Alexandria Ocasio-Cortez and Sen Ed Markey of MA. Its aim is to wean the country off of fossil fuels while at the same time spurring the economy by creating high-paying jobs in the clean (or green) energy sector. As the name implies, the Green New Deal has its roots in FDR’s New Deal but with a key improvement, which we’ll discuss. The authors of the Green New Deal see it as an historic opportunity to do three things: “(1) to create millions of good, high-wage jobs in the United States; (2) to provide unprecedented levels of prosperity and economic security for all people of the United States; and (3) to counteract systemic injustices”. (H. Res. Recognizing the duty of the Federal Government to create a Green New Deal, page 4)

Time out for a little history lesson … As you are well aware, the New Deal was born out of the suffering caused by the stock market crash of 1929 and the resulting Great Depression. It was a combination of public work projects, financial reforms, and regulations put in place by President Roosevelt from 1933-1936 to spur the economy by creating jobs (many in the infrastructure sector) and created, arguably, the largest middle class the U.S. has ever seen.

But many historians differ in opinion on the efficacy of the New Deal, particularly in respect to vulnerable populations. At the height of the Depression when the New Deal was started in 1933, unemployment peaked at 24.9%. But for African Americans, the unemployment rate soared to more than 50% – not to mention that the New Deal did nothing to address discrimination and segregation. In fact, the program may have exacerbated problems faced by African Americans. During the Depression, when jobs were scarce, blacks were often let go by employers to make room for whites. Additionally, white workers started taking low-paying, low-skilled jobs to which blacks were often relegated.

Some New Deal programs were downright harmful to the African American community. Programs like the Agricultural Adjustment Acts (AAA), which helped white landowners by giving them cash subsidies to let their fields go fallow, did nothing to ensure that that money was passed on to black sharecroppers and tenant farmers who were the ones doing the work.
​
There were even parts of the New Deal, such as the Works Progress Administration (WPA), that were racially segregated. The Public Works Administration (PWA) created the first civilian public housing, but this housing was segregated “even in neighborhoods that had previously been integrated,” writes Olivia Waxman.

Mexican Americans and Mexicans living in the southwest weren’t immune to the Great Depression either. Many of them worked back-breaking jobs in the agricultural sector. The economic downturn of the 1930’s decreased the need for farm labor. With demands from area politicians to alleviate unemployment, the federal government forced nearly 40,000 Mexicans and Mexican Americans to Mexico –until the trend was reversed during WWII when there was once again a need for farm labor. But until then Mexican and Mexican American agricultural workers received little relief from the New Deal.

Finally, an unfortunate legacy of Roosevelt’s New Deal is the negative impact many projects designed to create jobs had on the environment. No thought was given to how mass construction of dams, for example, disrupted existing ecosystems. Nor was thought given to the deleterious environmental effects of continued industrialization and pollution, particularly in low-income neighborhoods.

And then there’s this, which brings us full circle:  Part of the New Deal was the creation of the Federal Housing Administration (FHA), which created huge increases in home ownership but at the same time gave rise to suburban development that continues today. “This whole suburban boom has been at the center of our really unsustainable lifestyle, automobile dependence [and] sprawl,” says Peter F. Cannavò, a professor of government at Hamilton College and expert on environmental politics.

The Green New Deal seeks to address the inadequacies of the original New Deal by envisioning the problems we face in the 21st Century as interconnected. Troy Turner explained it best in a recent interview with Reading’s Finest when asked about his work with Sunrise Movement Berks. “Sunrise Movement is a movement of young people uniting to fight the climate crisis that we’re going through right now and create millions of good jobs in the process. We are unique in climate activism in that we don’t draw any distinctions between that and any other kind of movement work. We see that we’re in a climate crisis, but we’re also in an economic crisis. And so many people want to draw these lines, but it’s the same crisis.”

While it may be intellectually lazy to judge the work and motivation of past generations by today’s standards, the activism of groups like Sunrise Movement Berks shows that we continue to evolve. This new generation of organizers are striving to do what their grandparents and great-grandparents didn’t-to make the connection between the environment, the economy, sustainable energy, and populations historically lost in the shuffle. That’s the real deal!

Click here to read H. Res. Recognizing the duty of the Federal Government to create a Green New Deal

Indivisible Berks is building an army of regular people actively engaged in making government work for all of us, not just the privileged few. We want elected officials to represent all their constituents, including the most vulnerable. As an independent organization unaffiliated with any political party or beholden to any special interests, we welcome people of any political persuasion who are ready to oppose authoritarian, corrupt and dangerous policies and fight for liberty and justice for all. http://www.indivisibleberks.org/