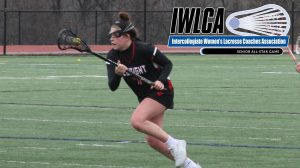 The game is set for Saturday, June 1 at 11:30 a.m. at Tierney Field at the U.S. Lacrosse Headquarters in Sparks, Md.

Bass is the first player in Albright women’s lacrosse program history to be selected to the game, and is one of four players from the MAC Commonwealth that were invited to participate.

Bass concluded her Albright career by earning All-MAC Commonwealth first team honors for the second-straight season, becoming the second Lion in program history to garner IWLCA All-Region honors, and most recently being named to the All-ECAC Division III Women’s Lacrosse Second Team. She concluded her final season with a single-season program record 91 points behind 50 goals and 41 assists. Bass also became the current Albright career leader in points at 242.

For the contest, Bass will play on the South team that will be under the direction of Wesleyan head coach, Kim Williams. Admission to the game is free and will be streamed live at IWLCA.TV.com