by Manor at Market Square 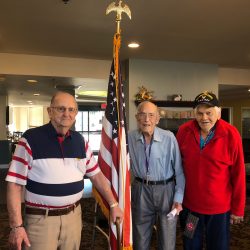 READING, Pa. – It was World War II, and young men across the United States found themselves thrust into global warfare, some by choice and some by selection.

Three residents at Manor at Market Square are often heard sharing stories as they reflect decades later on their service to their country—Joseph Shannon, 101st Airborne Division; Herb Schneider, a first lieutenant in the Air Force 351 Bomb Group, also served as captain in the Korean War; and Robert Donald Jenks, Army Air Corp.

Although the group knew each other as fellow residents, they quickly bonded over their military experiences.

Joseph enlisted at the age of 18. Herb was drafted, and Robert joined the Civil Air Patrol at 17 years old until he could go into the Army, where he served as a private.

Joseph and Herb were sent overseas, while Robert remained stateside.

“I often feel like I didn’t contribute since I didn’t have the opportunity to go over like these two,” said Robert, while gesturing at Joseph and Herb. “But, I do have very fond memories of my time in the service.”

He left his hometown of Williamsport, Lycoming County in Pennsylvania, for places like Chicago, Illinois; the bayou of Louisiana; and Biloxi, Mississippi.

“I remember being at the Gulfport motel when we got the orders to return to base. It took four days to get back, and by then, Japan had surrendered,” said Robert.

Thinking back on the phrase “Some gave all, all gave some,” Joseph knows he’s lucky to be here.

“I have two purple hearts,” he said, motioning to his battle wounds. “I was hit twice in Normandy with shrapnel in the forehead and stomach.”

Joseph recalls he arrived outside of Reading, England, and jumped into Normandy on D-Day.

“When the war was over, we were in Hitler’s home,” said Joseph. “Hitler’s home was beautiful; it really was.”

As for Herb, he was an ordnance officer with the 351st Bomb Group and responsible for with loading B-17 airplanes with bombs and ammunition that were on missions headed for Germany and France.

In his outfit was actor Clark Gable, who enlisted as a private in the Army Air Force, and was on personal orders from Gen. Hap Arnold to make a motion picture about aerial gunners in action, a film titled “Combat America.”

“He flew missions. And, I got to meet him a few times,” said Herb.

Herb recalled that he too almost didn’t return home after an accidental drop of a 500-pound bomb occurred while being loaded.

For his bravery and heroism, Herb was awarded the Soldier’s Medal and later received a Bronze Star Medal for developing new ways to load bombs.

To Robert, 93; Joseph, 97; and Herb, 101, their differences in their wartime involvement seem like a lifetime ago. Together they reminisced in the place they now call home, Manor at Market Square. Their renewed appreciation for their journey is apparent, as they know, some of their comrades didn’t get the same chance.