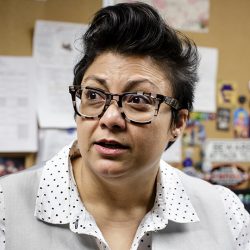 Nicholas has a long history of advocating for the CLGBTQ community. In 2015, she received Penn State’s Commission on LGBT Equity´s 2015 Outstanding Service Award, which recognized her service to the LGBTQ+ community as an active participant in improving the climate of diversity and inclusion for LGBTQ+ people at Penn State.

At Penn State Berks, Nicholas is the faculty adviser of Rainbow Alliance student organization. She has developed classes on LGBTQ+ identity, culture and communication and has led student trips to New York City to study LGBTQ+ history and the arts. In addition, she has published several articles and book chapters on LGBTQ+ topics, ranging from how eye-gaze is used as a “gaydar” trigger, to mapping out disciplinary / interdisciplinary LGBTQ+ studies. She has presented several conference papers on LGBTQ topics, receiving top-paper accolades for two of these papers. Currently, Nicholas is working on a book project related to lesbian Muslim identity in Malaysia.

Nicholas was one of the new members appointed to the President’s Commissions for Equity in a realignment of several existing advisory groups in mid April. The three groups — the Commission for Women (CFW); Commission for Lesbian, Gay, Bisexual, Transgender and Queer Equity (CLGBTQE); and Commission for Racial/Ethnic Diversity (CORED) — serve in an advisory capacity to Penn State’s President, providing recommendations germane to issues of women-identified; lesbian, gay, bisexual, transgender and queer; and/or racially or ethnically diverse people at Penn State. The commissions are charged with the identification of barriers that inhibit the full inclusion and advancement of persons from underrepresented and / or underserved populations to forward innovative, evidence-informed recommendations that support the creation of an inclusive and welcoming campus climate.

“Our goal is to create a diverse and welcoming community at Penn State,” noted Penn State University President Eric J. Barron. “We need to make certain that we are always actively searching out diverse opinions and experiences. This work, in particular, depends on a wide-range of perspectives being brought to each and every issue. Being fully informed is critical to decisions and policy making in all areas and I’m grateful for the participation of so many across the University.”