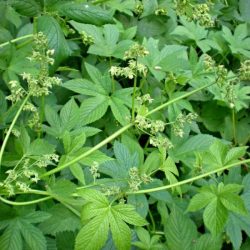 It’s arrival in the US: Native to China, Japan, Korea and Taiwan, this vine was brought to the U.S. in the mid-to-late 1800s as an ornamental and as a medicinal plant. Note: this is not the type of hops used for beer making.

What exactly is it? Japanese hops is an annual, climbing or trailing vine that can grow up to 35 feet in length in one growing season. Leaves are opposite along the vine and have an average of five lobes with toothed margins and a rough surface. The stem is covered with prickles. Female flowers appear in mid summer as cone-shaped clusters that hang down (called hops), while male flowers are upright and stemlike

Geographic range: Japanese hops is found in scattered counties throughout New England, the MidAtlantic and Midwest states, and as far south as Alabama.

Spread & Threat: This vine spread vegetatively by its fast growth rate and through abundant small seeds that can be spread by rivers and streams. The seed bank lasts approximately three years. Japanese hops can form dense patches that out-compete and smother native vegetation

Controlling it: The plants may be pulled in late spring and early summer, before they flower and set seed, typically prior to August. Be sure to wear gloves as protection from the hooked hairs that may cause blistering of the skin. When pulling, remove as much of the roots as possible, as the plant may resprout. Bag and discard all plant material. Repeated cutting or mowing close to the ground may also be used, however its effectiveness is limited as vines quickly re-grow from cut stems.