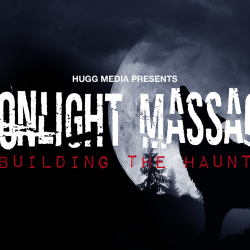 For years Halloween enthusiast Branden Moyer has constructed a haunted house in his backyard in Kenhorst, gathering thousands of visitors. With no more room to expand his home haunt, Moyer decided to take his hobby to the next level in 2018, by building a massive 4,000 square foot haunted attraction in the middle of a busy shopping plaza.

To document the progress, local photographer Jason Hugg filmed Moyer and his crew over a 5 month period, gathering video footage of the entire construction process. “It began with a pretty farfetched idea” said Hugg. “That’s what initially intrigued me. With no construction experience or a crew to build it, I knew he would do something, but didn’t know where it would go”. 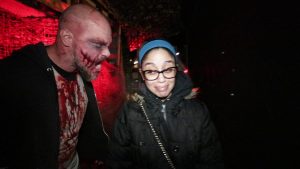 As time passed and the haunted house began to take shape, Hugg tells us a story emerged. “I started out just following Branden, but as he hired actors and staff, his crew started to influence him and began contributing their own ideas. It wasn’t just a job; it was something they loved to do. This gave me a new perspective on how to tell the story”.

Hugg says the documentary is not without its share of drama and excitement. “I won’t give away everything, but at one point a generator is stolen from the haunt site, and another time a haunt actor dressed up as a werewolf to hide in a local Halloween store”.

With Halloween over and the haunt finally closed, Hugg began the long process of editing hundreds of hours of film. “I’m not a full-time filmmaker, so I spent a lot of late nights editing the project. Now that it’s complete, I am definitely proud of the film” says Hugg.

With a run time of 1 hour and 15 minutes, Hugg’s documentary, Moonlight Massacre: Building the Haunt, is finally complete. A local premiere of the film is scheduled for June 28th, 7pm at the GoggleWorks Center for the Arts. In addition to the local screening, Hugg says he has also submitted the film to local and regional film festivals. 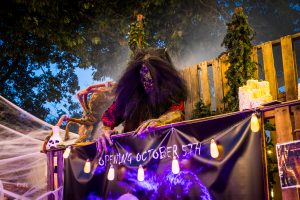 The local premiere includes a photo opp with the haunt actors from 6-7pm, screening of the film at 7pm, and filmmaker/ actor meet and greet after the showing. Tickets can be purchased on Eventbrite: https://www.eventbrite.com/e/moonlight-massacre-film-premiere-tickets-62689156956