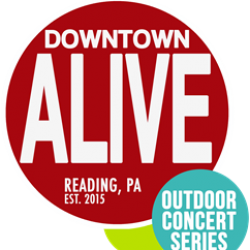 Reading, Pa. – Tomorrow night’s free Downtown Alive concert featuring Local H and Anthrophobia is being relocated to the Santander Performing Arts Center, 136 N. Sixth St. in Reading, due to the threat of inclement weather, according to the Reading Downtown Improvement District, which presents the concerts.

Doors will open at 5 p.m. and the show will start at 6 p.m. Food and beverages will be provided by the Santander Performing Arts Center. The vendors who usually participate in the outdoor concerts in the 500 block of Penn Street will not be available for this concert.

Free parking will be available at the Poplar and Walnut Streets garage starting at 4 p.m. Concert goers are advised to wait until closer to 5 p.m. to enter the garage, since more parking spaces will open up as the result of the departure of those who use the facility on a daily basis. There will be no free parking at the Fourth and Cherry Streets garage, where it is usually available for the outdoor concerts.

Local H is at the top of their game more than two decades after they first burst onto the music scene. Frontman Scott Lucas, who covers both guitar and bass (through an extra pick up in his guitar), and drummer Ryan Harding have enjoyed a resurgence in recent years, buoyed by global touring along with the release of some of their most critically acclaimed work to date. Opening for Local H will be local alt-rock band Anthrophobia.