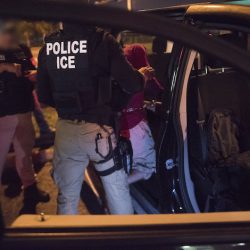 U.S. Immigration and Customs Enforcement (ICE) Officers arrested 271 criminal aliens last week in an enforcement action targeting individuals who pose a threat to public safety and immigration violations. ICE Enforcement and Removal Operations (ERO) officers made the arrests across the state of Florida, Puerto Rico and the U. S. Virgin Islands.
You May Also Like
Facebook Twitter Pinterest Email
Share

The new rule expands fast-track deportation to undocumented immigrants who have been in this country less than two years. (U.S. Immigration and Customs Enforcement)

The new rule went into effect July 23. Before then, undocumented immigrants apprehended within 100 miles of the border who could not prove they had lived in this country for more than two weeks could be deported in a matter of days.

The new rule, enacted without public comment, expands the residence requirement to two years and can be applied to immigrants anywhere in the United States without a hearing before an immigration judge.

According to Celso Perez, a staff attorney at the ACLU’s Immigrant’s Rights Project, that violates the Administrative Procedure Act, the Immigration and Nationality Act and the Fifth Amendment’s due-process clause.

“You can literally be deporting citizens, lawful permanent residents, and you can be deporting individuals who may be undocumented but may also have legitimate grounds for staying in the country,” he states.

Administration officials say the new rule will free up beds in immigrant detention facilities and reduce the backlog of cases in immigration court.

But Perez says the rule puts anyone who doesn’t have proof of how long he or she has been in the country at risk of detention and could lead to massive sweeps in communities anywhere in the country.

“It’s an extremely problematic carte blanche to officers in the sense that there is no real check on someone being picked up and detained by immigration,” Perez stresses.

Before the rule change, immigrants had a chance to challenge the basis and means of their detention or argue that they had grounds for being allowed to remain in the country.

Perez says the law requires a public comment period on a rule change such as this unless the administration can claim that exigent circumstances require it to be enacted immediately.

“The administration has been considering this for a period of years,” he states. “So, it’s unclear why now, all of a sudden, the rule is enacted the same day it’s issued without a notice and comment period.”

The lawsuit was been filed in U.S. District Court in Washington, D.C.