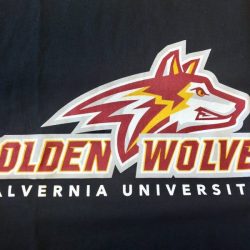 Alvernia has just three home matches in its first season. The Golden Wolves will compete 11 times on the road, with the majority of those competitions being invitationals or dual tournaments.

The Golden Wolves open their home schedule on Wednesday, November 13th with a dual match against Wilkes University in Alvernia’s Physical Education Center.

Alvernia will then head to the McDaniel Green Terror Duals on Sunday, November 17th before hosting King’s College on Saturday, November 23rd at 7:00 PM.

Alvernia then will compete at the Messiah Petrofes Invitational on December 6th-7th. The Golden Wolves then close out the fall semester with a dual match against Alfred State on December 15th before heading into winter break.

The Golden Wolves come out of the break with the January 4th invitational at Waynesburg.

A week later, the Golden Wolves head to the North South Duals at Ursinus College in their final match before the MAC Championship on Saturday, January 18th.

Alvernia continues its road schedule with the Keystone Duals, and dual matches with Penn College of Technology and Western New England.

The Golden Wolves return home for a dual match against Ursinus College in the regular season finale on Sunday, February 16th.