Entrepreneurship in 3D Is Alive and Well at Berks LaunchBox 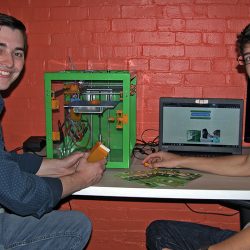 Sinclair, 25, whom you could easily call ‘Mr. 3D Printer,’ just launched his third business—Verde Mantis, LLC, the first local company focused on bringing 3D printing or additive manufacturing to the masses with its latest product, the 3D Mantis Printer (Mantis3DPrinter.com). The new venture emerges from the Penn State Berks LaunchBox, located within the GoggleWorks Center for the Arts in downtown Reading. 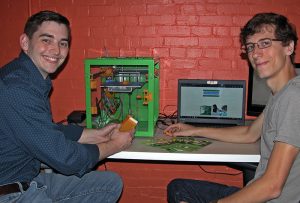 As an early member of the Berks LaunchBox initiative and with the help of Penn State Berks staff members, Sinclair has been able to invite local students to participate in the design and fabrication process of the Mantis 3D printer.

In regard to the creation of the Mantis 3D printer, Sinclair stated, “Years of working alongside 3D printers in manufacturing environments allowed us to understand the hurdles that prevent less technical folks from being able to utilize this groundbreaking technology. Imagine how making 3D printing easy and intuitive would democratize a technology that can change the world.”

Sinclair explains that 3D printing faces two key hurdles: the extensive skill set required to operate 3D printers effectively and the general lack of standardization across the industry. “We are in the early stages and there are not enough definitive standards,” said Sinclair. “We need to better educate potential users about the benefits of 3D printing relative to traditional manufacturing practices such as forging or casting. Extensive research and involvement by the science and engineering community are still required to unlock all the benefits of 3D printing and further understand limitations.”

“Leveraging this understanding, we’ve designed and built the Mantis, the world’s easiest to use 3D printer. The Mantis makes manufacturing as simple as just pressing print; this enables students and professionals to embrace their creativity in an expedited and intuitive manner. It allows people to focus on design and creativity and not how the machine works,” he explained.

“The learning curve for 3D printing is unbelievably long. The Mantis smashes that notion through automation. As a further benefit, the Mantis allows users to more easily access millions of copyright-free printable designs that are readily available on the Internet for download.”

The Mantis is a Wi-Fi enabled 16” x 16” x 16” cube, built from a laser-cut sheet metal frame, held together by rivets, and powder-coated the same color green as the inventor’s favorite color Lamborghini, which was also the inspiration for the company name. The majority of brackets and hinges that make up the Mantis 3D printer are actually produced by other Mantis printers in a self-replicating fashion. Each Mantis uses 1.75mm Polylactic Acid (PLA) filament to produce components. PLA is a safe and an environmentally friendly bioplastic made from renewable, natural resources. 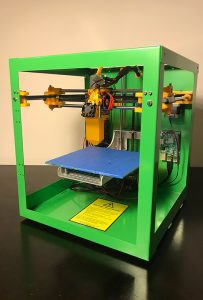 Sinclair is also proud to say the Mantis is designed and built in America. “Made in America is something we take pride in and hang our hats on. From the laser-cut sheet metal, to each individual rivet, the Mantis embodies the passion and spirit of American manufacturing. In that same vein, it is no mistake we’ve decided to set up shop here: Reading’s rich manufacturing legacy is a worthy foundation from which the Mantis can grow and prosper. With the help of the Penn State Berks LaunchBox, we’ve created a product that the Reading community can rally around to continue making manufacturing history.”

Sinclair, a graduate of Governor Mifflin High School, added that with sales of the Mantis 3D printer, Verde Mantis intends to grow its operations in the Greater Reading area in order to boost local manufacturing by students, artists and professionals alike.

The first student to team up with Sinclair at the Berks LaunchBox is Andrew O’Donohue, 19, Fleetwood, who just returned to Widener University in Chester, Pa. where he is a mechanical engineering major. The pair met at an entrepreneurship conference at Penn State Berks in 2015.

Sinclair said O’Donohue’s engineering knowledge, especially regarding robotics, was a perfect fit. “He has a firm understanding of the mechanical nature of robots and has done much to help improve the Mantis, including his more than two dozen upgrades to the printer’s hot end assembly. He is a tremendous asset to Verde Mantis and we want to continue working together.”

O’Donohue already has extensive experience with SkillsUSA, a partnership of students, teachers and industry working together to ensure America has a skilled workforce. That includes with the Berks Career & Technology Center and competing in the Mechatronics competition at the district, state and national levels, winning a first prize nationally in 2018.

“This is a really good first experience for me,” said O’Donohue. “I really enjoy CAD modeling and I have been able to expand my knowledge with Joe as CAD relates to 3D printing. I want to go into industrial maintenance to see how machines should be designed, and then into research and development to find ways to automate them. My Verde Mantis experience will be a good foundation.”

Like Donohue, Sinclair has impressive millennial credentials; in fact, he is the first graduate of the Master of Engineering in Additive Manufacturing and Design (AMD) program offered through the Penn State World Campus.

Sinclair graduated from Reading Area Community College in 2013 with an associate’s degree and Penn State in 2015 with undergraduate degrees in both Mechanical Engineering (Berks) and Nuclear Engineering (University Park), completing his studies at both campuses simultaneously. While completing both degrees, he managed to found his own 3D printing start up, Solid Dynamics LLC. (www.soliddynamics.net), which began as Joe’s Rapid Prototyping.

His first encounter with a 3-D printer was in the college’s Flemming Creativity, Entrepreneurship, and Economic Development Center, and it sparked his interest. With the help of his parents, he bought his first 3D printer while a student at Penn State Berks in hopes of learning how to make physical prototypes of the models designed in his engineering courses. “After a few hundred hours of trouble shooting and learning to use the 3D printer, I figured I could prototype models for my fellow engineering students for a modest fee. After successfully operating three 3D printers in my dorm room at Penn State University Park campus, it seemed time to create an official company. In 2014, I started Solid Dynamics,” said Sinclair, who is CEO of both of his companies, which also have operations across the state of Pennsylvania.

He continued to grow Solid Dynamics after graduation and accepted a job with Imperial Machine & Tool Company, Columbia, N.J.—recently acquired by Kaiser Aluminum–because of his strong interest in metal 3D printing.

When Sinclair learned about the new Additive Manufacturing & Design master’s degree program offered by Penn State, he signed up immediately and was able to complete it while working full-time and managing his own ventures.

“From my standpoint, you always have to keep learning and stay up to speed with the latest innovations technology has to offer.

He also learned another important management lesson running Solid Dynamics. “3D printing is not a simple matter of pressing ‘Print,’” explained Sinclair. “For example, historically, parts are tracked through the manufacturing process to ensure high quality and craftsmanship. However, this practice is difficult to incorporate into the 3D printing process.”

So, Sinclair essentially used Solid Dynamics to assess the problems of 3D printing and find ways for industry to address them. “With Verde Mantis, we are taking additive technology from the research and development stage and making it into a turnkey manufacturing operation for individuals to leverage in today’s competitive environment. We’ve spent the last year-and-a-half discerning how best to design and build a 3D printer specifically meant to make the process more intuitive. From this endeavor emerged the Mantis,” said Sinclair.

The first sale was the company’s beta model and sales are picking up. Standard operating procedures have been written, and Verde Mantis plans to add more technicians to ramp Reading production up to four printers a day.

Can 3D printing really be easy? It can. Just ask this writer who did it on the Mantis for the first time, successfully producing a rather ordinary but highly functional toothpaste tube squeezer.

To watch the Mantis 3D printer in action, view this short YouTube video: