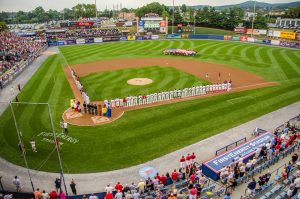 The Reading Fightin Phils welcomed their 15 millionth fan in 2019, drawing 398,314 over 67 home openings at FirstEnergy Stadium throughout this season.

Beginning as the home to the Reading Indians in 1952, FirstEnergy Stadium’s all-time regular season attendance now stands at 15,248,890.

FirstEnergy Stadium is the only active Double-A stadium that has hosted 15 million fans in stadium history. Thursday’s regular-season home finale featured a gathering of 9,270, the largest of the season.

The Fightin Phils have secured a spot in the 2019 playoffs, and will meet the Trenton Thunder in the East Division Finals beginning on Wednesday, September 4 at 7 p.m. at FirstEnergy Stadium. Reading will also host game two of the division series on Thursday, September 5 at 7 p.m.

Should Reading advance to the finals, the Fightins would host games one and two of the best-of-five series against the West division champions on Tuesday, September 10 and Wednesday, September 11, both at 7 p.m.

Tickets for all home playoff games are available now at the Weidenhammer Ticket Office at FirstEnergy Stadium, online at fightins.com/playoffs, or by calling 610-370-BALL.