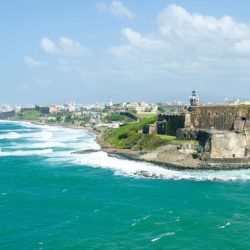 A year following Hurricane Maria, both the population and poverty rate declined in Puerto Rico.

The number of movers from the territory to the mainland United States increased by more than a third in 2018.

More than half moved to the South and more than a quarter moved to the Northeast. Their destinations across the United States shifted from 2017 with higher growth rates in the West and South than in the Northeast or Midwest.

More people moved from Puerto Rico to Florida, Indiana, New York, Oklahoma, Texas and Washington in 2018 than in the prior year.

Figure 2 shows states with at least 2,000 people who  moved from Puerto Rico in 2017 and 2018, along with states that had a significant change in the number of people moving  from Puerto Rico.

One-third (33.5%) of all Puerto Ricans who moved to the mainland United States in 2018 moved to Florida. Popular destinations in previous years, Michigan and Georgia, experienced a decline in the number of Puerto Ricans moving there.

How do we know where people moving from Puerto Rico settled?

However, poverty in Puerto Rico is still much higher than the U.S. national rate of 13.1% and is more than double the poverty rate of 19.7% in Mississippi, which had among the highest state poverty rates in 2018.

While the 2018 rate is a decrease from the 2017 estimate, it is not statistically different from the 2016 estimate.

Use caution when making year-to-year comparisons. Here’s why:

Next year, when data from 2019 are available, we will be able to compare those poverty rates to the 2016 estimates to get a better sense of the impact of the storm on poverty.

How Compositional Changes in the Population Affect Poverty

Data from the ACS can help to explain changes in the poverty rate across 2017 and 2018 as a result of changes in both the composition of the population as well as economic changes within population groups.

While the overall poverty rate decreased from 2017 to 2018, the only age group (Figure 4) to experience a statistically significant decrease in poverty rates in 2018 was the population ages 18 to 64. Their poverty rate fell from 41.9% to 40.5%.

Since children generally have higher poverty rates than those age 65 or older, 56.9% compared to 38.2% for 2018, these changes also impact the overall poverty rate.