MINNEAPOLIS – First-Year Albright football cornerback Chris Holbrook earned another weekly honor as he was named to the D3football.com Team of the Week on Tuesday morning. 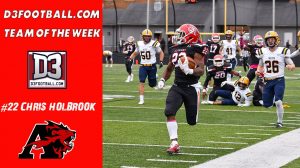 The D3football.com Team of the Week is a weekly honor roll, started in 1999. It recognizes the top individual performance at each position.

Holbrook earned a spot on the national team at the return spot following his historic performance against Wilkes last Saturday. Holbrook became the first player in program history to run two kickoffs back for a touchdown in a single-game. He ran the game’s opening kickoff 91-yards for the score to give Albright the early 6-0 lead. Holbrook then returned a kickoff 93-yards for a score in the second quarter just before halftime. In four returns, he totaled 243 yards. Holbrook became the first Lion to return a kickoff back for a touchdown in three seasons.

For the entire D3football.com Team of the Week, click here.

The Lions will return to action on Saturday, October 19th when they will travel to face Stevenson for a 1 p.m. showdown in MAC play.