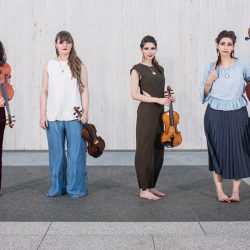 A classically trained, crossover string quartet composed of four female musicians, ATLYS is well known for their incredibly passionate and interactive performances. They will bring their unique sound to Penn State Berks on Wednesday, November 13, at 7 p.m. in the Perkins Student Center Auditorium. This event is free and open to the public.

ATLYS will transport the audience on a musical voyage around the world. Its members create a concert atmosphere that is absolutely mesmerizing. Using the string quartet as their blank canvas, they veer outside the classical ‘music box’ to develop creative, original covers of some of our most loved music by electrifying their instruments and using looping pedals. At the same time, they enjoy returning within the borders of that ‘box’ to perform lesser-known classical works, creating a program that is both diverse and intriguing. ATLYS has nearly 1000 performances under their belt, having charmed audiences around the world. They enjoy performing in unconventional spaces, captivating pop and classical music lovers alike.

Penn State Berks reserves the right to limit the photography and/or recording of any program. The permitted or prohibited activities during a particular program will be announced at the beginning of the event and/or included in the printed program.