MINNEAPOLIS – Senior Albright football quarterback/punter Jimmy Lahay was named to the D3football.com Team of the Week as a punter on October 29. 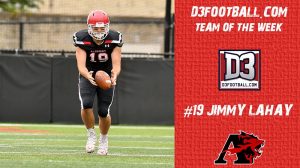 The D3football.com Team of the Week is a weekly honor roll, started in 1999. It recognizes the top individual performance at each position.

Lahay earned a spot on the national team at the punter spot following his strong performance against Widener last Saturday. The Maryland native averaged a career-high 48.5 yards per punt on four attempts, and hit a career-long 57 yard punt. The 48.5 yards per punt were the fourth-highest in a single game in Lions program history. He landed a pair of punts inside the 20-yard line, and added a second 50+ yard punt. This is the first season Lahay has taken punting responsibilities in addition to starting at quarterback for the past two seasons.

This is the first time he has earned a weekly award from D3football.com in his career, and is the second Lion to land on a D3football.com Team of the Week this season. First-year Chris Holbrook earned a spot as a returner on the week six team.

For the entire D3football.com Team of the Week, click here.

The Lions will return to action on Saturday, November 2nd when they will travel to face King’s for a 1 p.m. showdown in MAC play.