Love Her for Lover 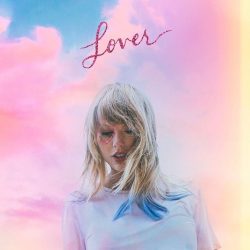 “Her epic seventh album is all about big moods, dreamy Eighties throwbacks and evolutionary freedom,” according to Rolling Stone. Taylor Swift, one of the biggest pop icons, released her most recent album “Lover” on August 23, 2019. With the album being eighteen songs long and all songs written by her with a few collaborations, it is the longest album she has ever released, with the others in the past not exceeding sixteen songs.

This album is exceptionally vulnerable and one of her proudest works. The album consists of many upbeat and fun songs to listen to including the singles “ME!” featuring Brendon Urie and “You Need To Calm Down,” as well as emotional songs like “Soon You’ll Get Better” featuring the Dixie Chicks which is about her mother battling cancer and suffering a relapse. In most songs, she sings about her current British boyfriend Joe Alwyn, as you can tell in “London Boy,” “Paper Rings,” and the title track “Lover.”

Taylor Swift released four deluxe versions of the album, each one being different and having Taylor’s old diaries from when she was thirteen all the way up to her later twenties, the CD itself, some fun pictures, and in the back, there is room for fans to write their diaries and notes. Each deluxe version also includes voice memos from when she was first writing the song and how the song came together.

In an interview with CBS Sunday Morning, Swift explains how the songs she wrote for Lover were on the piano, “usually in the middle of the night.” This interview was a rare event for Swift. After having one of the most successful tours in the middle of 2018, “Reputation” was a period of time for her to stay away from any media. According to the interview, they say she has “an armload of number one hits, more Grammy awards than the Rolling Stones, as well as being the highest-paid celebrity of 2019 with $185 million”. Swift talks about how “If I were to fall in love, someone is choosing to be in that fishbowl with me,” as you can see in the “Lover” music video, which has over sixty-eight million views on YouTube.

Taylor Swift explains in the “Lover Lounge,” how this album felt like an energetic daytime, being an “open, free, and whimsical” place. Consequence Of Sound says, “The maturation through Taylor Swift’s career has also shown her react to personal change in real time.” Be sure to listen to this album if you have not already, because it is one of the most vulnerable, aesthetic, and calming albums of the year