LOCK HAVEN, Pa. — The 17th-ranked Kutztown University football team locked up its second Pennsylvania State Athletic Conference (PSAC) Eastern Division title in the last four seasons and fourth overall with a 30-17 win at No. 22 West Chester on Saturday. On November 4, two of the key players in making that happen were honored by the league office. Redshirt senior quarterback Collin DiGalbo was named PSAC East Offensive Athlete of the Week for the third time this season, while senior cornerback Ahkee Cox-Cowan claimed PSAC East Defensive Athlete of the Week honors for the first time. 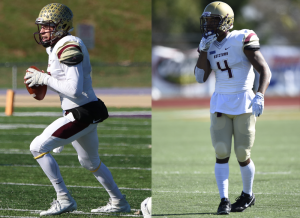 DiGalbo threw for 300 yards and two touchdowns, while adding 32 yards rushing in the Golden Bears’ victory. He finished 13-of-22 passing with a 63-yard touchdown to Diego Torres in the second quarter and a 25-yarder to Jerry Kapp in the fourth that put the game away. The touchdown toss to Kapp marked the 100th DiGalbo has been involved in during his time at KU (68 passing, 32 rushing).

DiGalbo, who ranks top five in NCAA Division II in passing efficiency (third), total points responsible for (fourth) and per game (fifth), has 24 touchdown passes against five interceptions. He moved into a tie for seventh among KU’s single-season leaders in touchdown passes and went over 2,000 passing yards for the season during Saturday’s victory.

Cox-Cowan tied a program record with his 47th career pass breakup and led the Golden Bears with 10 tackles in Saturday’s monumental win.

With one more pass breakup, Cox-Cowan will take sole possession of the top spot in KU’s record book from English Peay, who he tied with No. 47 on Saturday. He currently ranks second in the PSAC and 37th in DII with 1.3 passes defended per game.