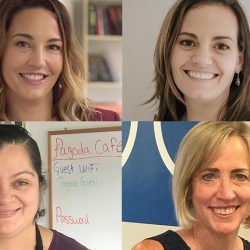 The Flemming Creativity, Entrepreneurship and Economic Development Center, located within the Penn State Berks Gaige Technology and Business Innovation Building, will host “Women Entrepreneurs of Berks County” as part of the 2019 Fall Entrepreneurship Speaker Series on Wednesday, November 13, from 12:15–1:15 p.m. This event is free and open to the public.

Parisi was born and raised in Berks County. She is a graduate of Holy Name High School, Villanova University, University of Maryland Dental School and Eastman School of Orthodontics–University of Rochester. An international speaker in the field of orthodontics, Parisi has been a full-time orthodontist for 24 years and is an adjunct professor of orthodontics at Temple University’s Kornberg School of Dentistry. She is an award-winning orthodontist, professor and community advocate. ROG Orthodontics has locations in Wyomissing, Douglassville and Pottstown.

Szejko earned a B.S. in Criminal Justice from York College. She joined SOLO Laboratories, Inc., a manufacturer of custom orthotics and AFOs, in 2005. From 2005-2016 she held various positions in the company, from customer service to sales and marketing. Szejko was named president in 2017 and CEO in 2018. She resides in Kutztown with her husband and two children.

Vasquez emigrated to the United States from Mexico in 2000. She started working as a helper at a restaurant where she later became a manger. Then she moved to Pennsylvania in 2008 with her two daughters and continued to work at small local businesses. To achieve her financial goals, Vasquez started investing in real estate and started YAVE Investments, LLC. In 2019, she achieved her dream of opening her own restaurant, Pagoda Cafe & Catering Services.

Jaimyn Westenhoefer began her career as a licensed aesthetician and worked at a few different salons and medical spas over the course of 12 years. In 2012, SOLO Laboratories, Inc., had an opening in the sales department and she decided to join the company. The role quickly developed from sales to taking on a leadership role in the company. In 2018, she was named president of SOLO Laboratories, Inc. She lives in Fleetwood with her husband and three children.