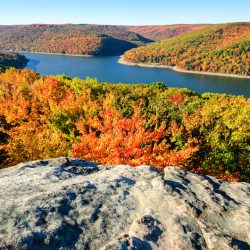 The 513,000-acre Allegheny National Forest includes 25,000 acres protected under what is known as the Roadless Rule, which has been in place since 2001.

HARRISBURG, Pa. – Congress is hearing from opponents of a plan to exempt an Alaskan national forest from protection under the Roadless Rule, the same rule that protects 25,000 acres of national forestland in Pennsylvania.

The U.S. Forest Service is holding hearings in Alaska and Washington, D.C., this week about exempting Alaska’s Tongass National Forest from the rule that keeps roads, development and extractive industries out. Mike Dombeck, former chief of the Forest Service, said the national forests are 193 million acres of land that belong to all U.S. citizens.

“The Roadless Rule protects the wildest remaining places on these national forests from road-building and development,” he said. “In fact, the goal is to keep the wildest places wild.”

The Forest Service said the exemption would allow greater flexibility for timber harvest activities and guidance for the access needs of isolated rural communities. However, Lexi Hackett, a commercial fisher from Sitka, Alaska, suggested that building roads to open up national forests to development ignores the intrinsic value that these areas hold.

“There are economic drivers to keeping the forest healthy and protected, and I would say the primary is fishing, but also tourism,” she said. “Tourism would definitely be diminished if there was a lot of unattractive projects put in.”

According to the Forest Service, the Allegheny National Forest sees 4 million visitors a year.

Dombeck said he believes that as the world becomes more urbanized, our remaining wild places are of increasing value and need to be protected.

“A recent study by Conservation Science Partners found that we’re losing open space in the U.S. at the rate of two football fields every minute,” he said.

The public comment period for the proposed Roadless Rule change ends on Dec. 16.

The public-hearing schedule is online at fs.usda.gov, the Roadless Rule is at fs.fed.us, and information on the subcommittee hearing is at naturalresources.house.gov. Information about the Allegheny National Forest is here, and public comments can be made at usda.gov.