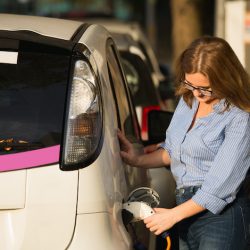 The Trump administration wants to freeze auto emission standards and block California and other states – including Pennsylvania – from demanding stronger tailpipe pollution controls.

Vanessa Lynch, a field consultant with the Pennsylvania chapter of Moms Clean Air Force, points out that several automakers – including Honda, Ford and BMW – are backing the push for California’s stricter standards.

“Maintaining the higher emission standards for cars is fundamental to Pennsylvania’s ability to make progress on any sort of climate or pollution goals that we have,” says Lynch.

Suzanne Baker-Branstetter is the manager of Cars and Energy Policy at Consumer Reports. She notes that many automakers are investing in new and better clean-car technology for buyers overseas, but choosing not to install it on models for sale in the U.S.

“The technology already exists to improve efficiency,” says Baker-Branstetter. “So, there’s really no reason for automakers not to be delivering these vehicles and improving fuel efficiency.”

GM, Chrysler and Toyota are among the manufacturers that are siding with Trump administration efforts to weaken emission standards and block states from insisting on cleaner cars.

Lynch’s family makes clean air and fighting climate change a high priority and put aside money to buy a Toyota hybrid car. She says the brand’s alignment with the administration is extremely disappointing.

“We worked so hard to make this an important part of what we were doing,” says Lynch. “And Toyota is working with Trump to dismantle one of the most important public health laws of our times, the Clean Air Act.”

Pennsylvania is one of 12 states that have formed the Transportation and Climate Initiative to reduce greenhouse-gas emissions from all forms of transportation.